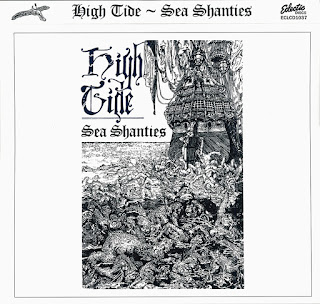 What would The Doors have sounded like had they included lead violin and fuzzed out guitars with their organ driven brand of psychedelic rock and roll? Perhaps something like High Tide, a very interesting band from the late 60's/early 70's UK proto-prog scene. The band was part of the Clearwater Management stable of bands that also included Hawkwind, Skin Alley, and Cochise, and their debut album Sea Shanties was on the Liberty/United Artists label. Made up of Tony Hill (guitar/vocals/keyboards), Simon House (violin/keyboards), Peter Pavli (bass) and Roger Hadden (drums), these four musicians mustered together some powerful sounds here on their debut, complete with plenty of bone crunching and doomy guitar riffs, wah-wah solos, soaring violin flights, raging organ, pounding drums, and a Jim Morrison-influenced vocal attack. Much of the music is pretty heavy for the time, with lots of wild and intricate jamming going on between the guitar and violin, which can certainly be heard to full effect on the mind-blowing frenzy of the instrumental "Death Warmed Up", a real scorcher featuring savage, distorted guitar and violin solos.

Their classic "Futilist's Lament" is a real driving hard rock/early prog number, with catchy riffs, swirling organ, melodic violin, and passionate vocals. "Pushed, But Not Forgotten" sounds like a strange marriage of The Doors and Led Zeppelin, with creepy organ, powerful vocals, and plenty of Jimmy Page styled wah-wah guitar flourishes ("Dazed and Confused" anyone?), not to mention some whispy violin. After the bruising hard rock of "Walking Down the Outlook", which also features a killer violin solo from House, the band launches into the unique sounding "Missing Out", a near 10-minute mix of doom and jazzy hoedown themes. You want scorching guitar riffs, sizzling violin, and haunting vocals-well, this one has it all.

The regular part of the album ends with the rocking "Nowhere", a song with dizzying guitar & violin interplay, but the intense fuzz guitar sound that Hill gets on this one is what is so attractive about this proggy track. The bonus material presented here is pretty neat, mostly demo and unusued studio recordings worked on before the finished album. Of these, the extended jams of "The Great Universal Protection Racket", the crunchy rocker "Dilemma", and the driving mix of prog and heavy rock of "Time Gauges" perfectly complement the album.

High Tide only recorded one more album after this one, and by 1971 had ceased to exist. Simon House joined Third Ear Band and then Hawkwind, before joining up with David Bowie for a few years, while drummer Peter Pavli collaborated with sci-fi author Michael Moorcock in his band Deep Fix as well as working with Hawkwind's Robert Calvert. Tony Hill resurrected High Tide briefly in the early 90's, but today keeps most of attention centered on his own band Tony Hill's Fiction. For the most part, the music of High Tide was buried deep in the vaults until now, but thanks to Eclectic Discs these raw & powerful recordings can be enjoyed by lovers of the early 70's proto-prog and hard rock scene.
by Pete Pardo 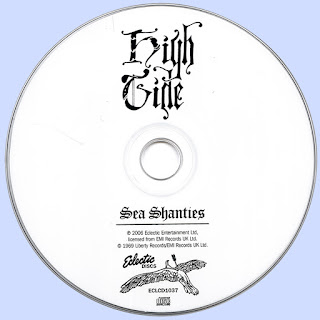