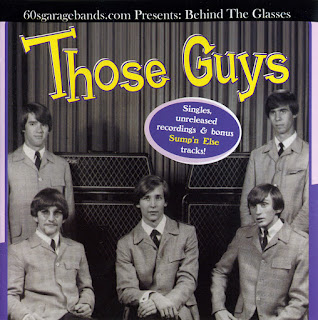 Realizing a good thing when one came along, Those Guys David Owens, Jimmy Owens and Bill Dabbs hooked up with Bob Barnes and Eddie Deaton shortly after that duo's own rock band--the legendary Elite--broke up.  This line-up of Those Guys would soon become one of the most popular groups in the Dallas/Ft. Worth area.  The band scored a regional hit in 1967 with their version of 'People Say' but reached their peak behind the incredibly strong songwriting of David Owens.  Over forty years later, their 'Stereopis Of A Floret' and 'Lookin' At You Behind The Glasses' have become recognized as garage rock and psychedelic classics.

This collection of Those Guys recordings includes the complete recorded output of the core group, including their four single sides, six unreleased recordings enginnered by T-Bone Burnett and four bonus tracks recorded for the Sump'n Else TV show. 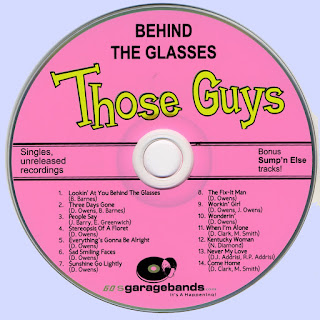 Free Text
Just Paste
Posted by Marios at 4:44 AM 7 comments: