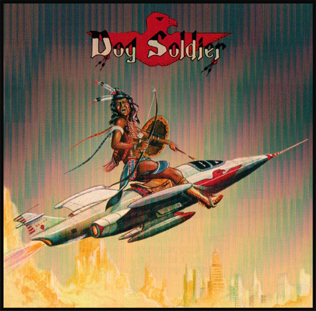 The first official CD release of the album Dog Soldier. Keef Hartley formed the band bringing together Mel Simpson keyboards/vocals, Miller Anderson vocals/guitar, Paul Bliss bass/vocals, Derek Griffiths guitar/vocals and Hartley on drums. Hartley a British drummer got his start when he was one of the drummers to replace Ringo Starr in the band Rory Storm and the Hurricanes in 1963 when Ringo left to join the Beatles. From the Hurricanes Hartley joined the Artwoods which was a band headed by Arthur Wood the oldest brother of Ronnie Wood of The bands Faces and Rolling Stones. Derek Griffiths was a member of Artwood with Hartley and Miller Anderson was a part of Keef Hartley Band and a member of Savoy Brown band in 1974.

Another member of Artwood was Jon Lord who went on to be a founding member of Deep Purple and Hartley went to John Mayall's Bluesbreakers. In the late 60s Hartley formed Keef Hartley Band and in 1969 it was one of the few British bands to play Woodstock Festival. The sole album of Dog Soldier was recorded between November 18 and December 15, 1974 and featured excellent material such as Pillar To Post , Thieves And Robbers and the twelve minute long Looks Like Rain .According to Miller Anderson's interview:Dog Soldier was an Indian name that Keef Hartley thought of as a band name. When Al Teller, the boss of United Artists in the USA, heard I had more or less turned down the gig with BLOOD, SWEAT AND TEARS, he was interested to see what else I was doing. Keef knew that if anything came from this it would be because of this interest and wanted to be just part of the the band for a change. Al Teller came to London to hear the band and signed us to United Artists. And that was the "Dog Soldier" album. 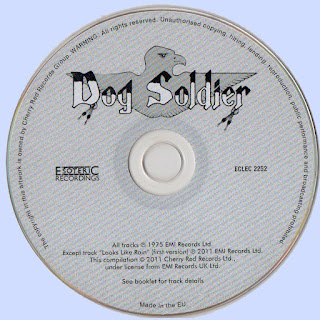