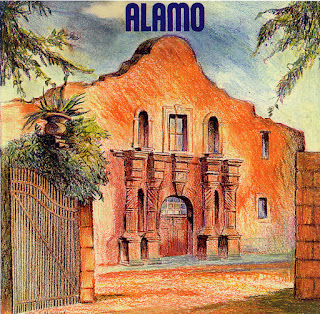 Memphis Tennessee not only reeled in country styled rock but also quivered under the savaging thunder of Alamo.The roots of Alamo go back to guitarist Larry Raspberry who played with the Gentrys in 1965 when they charted with “Keep On Dancing”. The strength of Alamo was largely due to the mountainous vox and grinding hammond of ex Cosmos Ken Woodley coupled with the gritty guitar breaks of Larry. Larry Davis played bass while drums was highly charged by Richard Rosebrough.The groups 1971self titled album powers forth with the massive opener “Got To Find Another Way” in the same energized spirit as Scotland’s Writing On The Wall or Germany’s Karthago.
This thunderous opener has Larry ripping the hell out of his axe with no prisoners taken. “Soft And Gentle” is a determined effort from the band to slow down with Larry sliding in a heavy toned Bloodrock manner. Ken Woodley reaps some great riffs on his hammond through “The World We Seek” with Larry not far behind on his gator growling axe. “Been Some Changes” also allows Larry to spit out some riveting leadbreaks that would have suited the likes of Grand Funk or Rare Earth while “Get The Feelin’” is a vibrant supercharge of percussion and bass where each member has his slice of solo.The group disbanded after the album and Larry formed Larry Raspberry & The Highsteppers while Richard Rosenbrough joined Lee Baker &The Agitators.
Hippyland 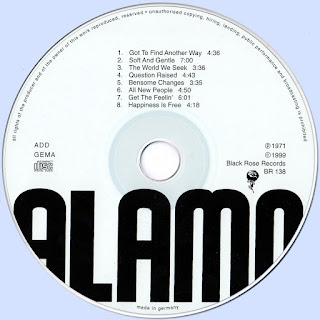