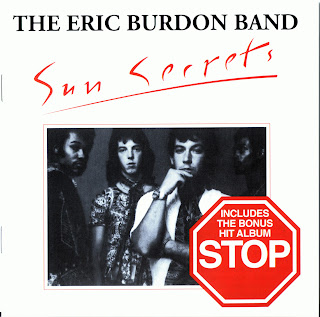 The story of these two albums is equally troubled as the story and career of Eric Burdon, maybe the most important voice of the British Invasion of the 60s. Either with the Alan Price Combo (later to be renamed to Animals) in 1962 or with the Animals until their MkIII disband in 1968 and either with WAR or the New Animals that follow him with various forms until today, Eric Burdon is probably the only musician of the 60s that lived through all the versions of success and failure, on both sides of the ocean, working together but more importantly living together with the biggest personalities of the music scene of the era.

In any case, he differs a lot compared to the other big stars of the time, for two particular reasons. First, he was never a star. He was there prior to all of the others (except everybody’s teacher Alexis Korner) and he was there to see the Silver Beatles moving to Germany and he was there to see them return as the Beatles. He was also there to see the Rolling Stones release their first hit and project into a stardom that he would never experience. Second, because instead of just get inspired by the same idols that he shared with the others, he made that music his own, he lived with those idols and worked with them without expecting profit or glory. He served his childhood heroes and along with them he served the music that he loved so much and that he remained faithful to, against the weather, until today.

Eric Burdon experienced the dark side of stardom as no other and sucked to it to the bone, carrying his experiences along with his music. He engrafted his art with what he managed to gain from his relationship with Jimmy Hendrix but also his death, from the blues lessons he received from an old blind, poor road bluesman in Los Angeles. He learned by heart and accumulated the most he could from working with Howling Wolf and Jimmy Witherspoon and so many blues greats. He travelled around the world and he is still the most charismatic bluesman, even if he is white, even if he can no longer stand singing in rooms full of smoke and sweat.

After the Animals finally broke up and Burdon going bankrupt because of bad management from their agent and the dubius part that Price and Chandler had in it, Eric almost quit and he was just ready to return to Newcastle and the coalmines that his father worked, if lady luck had not brought him to a show by a band named Nightwish, early in 1969. Eric took the opportunity, he named himself singer of the band, added up the Dane youngster Oscar Lee to the lineup and changed the band’s name to WAR, just soon enough to present them to the world with the album “Eric Burdon Declares WAR” with several more highly successful works to follow.

This project was not meant to last for long, though. Constant quarrels with Record Companies and Eric’s continuous abuse of drugs and alcohol made him break up with WAR and decide to get on with a solo career. This turn brought him in touch with guitarist Aalon Butler with whom he recorded and released “Sun Secrets” in 1974 when Burdon decided to add up guitarist John Sterling and record with him “Stop” in 1975. “Stop” finally, hit the selves just after the Eric Burdon Band was already history and as :Sun Secrets” before it, failed to make an impact.

On the other hand, Eric, continuing his endless fight with the Record Companies, decided to block the releases and withdraw the albums since the company refused to pay him his rights. The two albums were released anew in 1993, both on one CD, again meeting the resistance of Burdon. This and the two original releases of the two albums, are, now, quite hard to find.

As hard as it was with these two albums, so similar they looked to each other, as they were recorded and composed during one of Burdon’s most troubled periods.

Sun Secrets relies more in the Animals and WAR era, albeit with a twist. In this album, Eric buries his blues roots as deep as he can and performs, among others, classic Animals hits like It’s my life (opening cut), Don’t let Me Be Misunderstood and When I was Young, although in a unique, angry and aggressive way, with a rock energy that startles.

He seems to denunciate his own past, twisting it in purpose, trying, maybe, to change the way things flow, already knowing that he cannot. Johnny Cash’s hit Ring Of Fire arrangement in this album is given in such a way that it proves beyond any doubt what Eric was like at those times and the way that he looked upon himself as an artist. The Real Me and Letter from The Country Farm show the most heavy, melancholic and isolated Eric ever, while the instrumental Sun Secrets is just there to fit with the mood of the rest of the album.

Stop, equally angry if you look at it through Burdon’s perspective, has a distinctly different compositional aspect playing games between rock, jazz and soul/funk shades, colouring Eric melancholic mood with a deliberately lighter mood, however it fails to hide his desire to cut off. It is quite characteristic that in the songs that Burdon has a part in the composition, the blues feeling is more than evident, even id none of the songs resembles his earlier style.

Indeed, City Boy, Rainbow and All I Do really make a change amongst the album’s ambience and make a turn back to Eric’s roots, while in the rest (with the exception of the excellent Stop) Eric sounds detached and alienated while his performance and his voice sound different and estranged. In any case, the great performer is there, even if he “pretends”, successfully though, to be someone else, until the albums grand finale where he bursts out screaming Stop to the end of his voice in one of the best cuts the 70s ever produced.

Two of the less known albums that Eric Burdon recorded, they are still classics in their own way. They are classics because they picture the life and the artistic journey of a 60s legend after the lights are gone. They are classics because they prove beyond doubt, that these great performers do not need a light beam to show, because at the end of their prime they just lend some of their light to others, only to deterministically take it back in the end.

Eric Burdon is simply one of these great performers. He lived through the revolutions of music and youth in a way and extent that no one else did and he is still alive to remember. And while some others just live or have already passed away, he, at sixty six years old, he continues to be fully active, releasing one album after another, just doing the same thing he started in Newcastle by mistake, back in 1960. Singing the blues better than anyone.
by Alex Politis 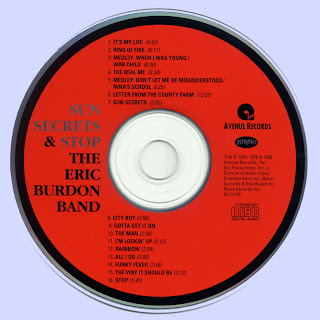