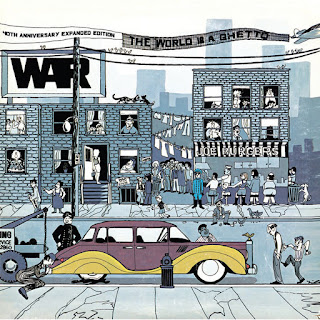 War was great—funky, bluesy, jazzy and meditative; their hits were jams edited into pop sensations. Their sound was unique: a thick stew of stone funk, deep bass lines, African percussion, jazz-R&B organ, Latin rhythms, free-form jazz and previously untested combinations, like harmonica and saxophone. Their vocals were earthy—sometimes weary, sometimes happy—with gospel-soul licks and group chants. By late 1972, when work began on the album The World Is A Ghetto, their grooves were already in the air. “Spill The Wine,” a collaboration with British blues-rock star Eric Burdon, had been a smash. Then came tours, two albums, and the hit “Slippin’ Into Darkness.”
The time was right. Self-contained groups, from Earth, Wind & Fire to multi-racial jam band the Allman Brothers, and personally expressive black singer-songwriters from Stevie Wonder to Bill Withers, were on the rise. Miles Davis and Marvin Gaye were experimenting, shaking loose of formula. War—seven guys from Compton and Long Beach in Southern California: Thomas “Papa Dee” Allen, on percussion; Harold Brown, drums; B.B. Dickerson, bass; Lonnie Jordan, keyboards; Charles Miller, saxophones; Lee Oskar, born in Denmark but living in L.A., harmonica; and Howard Scott, guitar—was in the middle of the mix.
The Ghetto album was the result of spirited rehearsals in Long Beach followed by two solid weeks of jam sessions at Crystal Industries studio in Los Angeles. Papa Dee provided the central theme—ghetto life has no boundaries, illustrated on the cover by a Rolls Royce with a flat tire. With no boundaries in the studio, the band drew on their many roots: their bittersweet title song, infused with jazz, fell together on take 36. “The Cisco Kid,” the album’s eventual pop centerpiece, was inspired by Scott’s fond memories of a popular television character, and solidified the band’s growing Chicano following. “Where Was You At” evolved from a syncopated New Orleans drum line, thanks to Brown’s recollections of their early Southwest tours. (“No jazz on this session,” he calls out on one take.) The immersive, spacey “Four Cornered Room” was inspired by Dickerson’s first experiments with hashish. “Beetles In A Bog,” from Oskar, is a jazz march.
“City, Country, City” is the album’s longest jam, a beautiful, virtuosic performance spotlighting among others Miller’s flowing sax. Its cinematic feel owes a debt to its origin: as score for the Paramount film The Legend Of Nigger Charley, at a time when their peers Isaac Hayes, James Brown, Curtis Mayfield, Bobby Womack and Marvin Gaye were creating movie soundtracks. “[The studio] wasn’t giving us enough credit and money, so we took the song back,” Jordan told writer Barry Alfonso. “The movie didn’t make it that big, but our record did.” (John Bennings was the film’s eventual composer; Lloyd Price sang the theme song.)  “They just cooked,” said Jerry Goldstein, the group’s longtime produc¬er who had been through the music business wars with Jimi Hendrix and Sly Stone. “Then we’d carve out a 35- to 40-minute album from the jams.”
Some of the LP’s ideas were not so much discarded as considered too long for the vinyl era. The chugging “Freight Train Jam” is a band tour-de-force in the vein of “City, Country, City.” “58 Blues” is more down-home. “War Is Coming” is a scalding rock-blues, a slower, early version of a funk jam the group would release five years later on Platinum Jazz. Each is included in this 40th anniver¬sary expanded edition.
Although “The Cisco Kid” became a huge crossover hit, selling one million copies its first day of release, an edited version of “The World Is A Ghetto” was the album’s first single, and a bigger hit on the R&B/Soul singles chart. The audience was hungry for a messenger, according to Jordan. “Someone had to be the teacher or the preacher back then,” he further relayed to Alfonso. “We chose to be that.” Oskar thought the move was less intentional. “As far as being political and making heavy statements go, I think people were looking for that,” he said. “They wanted to believe that something they liked was meaningful. The music was the main thing.”
War continued as a force through the 1970s, following this album with Deliver The Word, which includes the hit “Gypsy Man”; a double-live LP; the smashes “Why Can’t We Be Friends” and “Low Rider”; the disco hit “Galaxy”; and the soundtrack to Youngblood. Yet The World Is A Ghetto, the best-selling album of 1973, was the group’s only No. 1 Pop album. George Benson’s 1977 up-tempo version of the title song was one of many covers; nearly 20 years later the Texas rap group Geto Boys interpolated the original. “The Cisco Kid” has become a kind of perennial. “City, Country, City” is the go-to track to convert skeptics who’ve only heard the hits.
War is still great.
by Harry Weinger 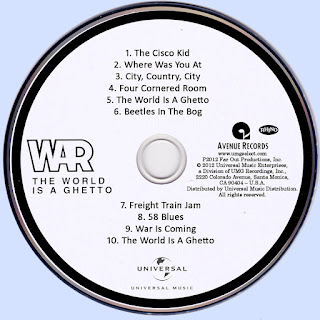