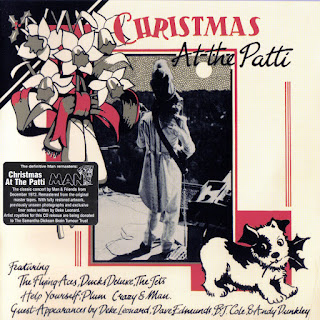 'On 19th December 1972 the Man band and their friends and ladies organised a Christmas party at the Patti Pavillion in Swansea. The party started at six and came to a premature end at midnight when the Swansea Constabulary decided enough was enough...
Live had always been the way Welsh rock bands were best appreciated: much of Man's first album, 'Revelation'. had been cut at the Langland Hotel in Swansea before being enhanced in the studio, while 1972 had already seen Man's earlier fourpiece incarnation of Deke Leonard, Micky Jones, Martin Ace and Terry Williams appear on two limited edition albums, 'Greasy Truckers Party' and 'Live At The Padget Rooms Penarth'' (both recently reissued on CD by Point/Voiceprint).
Appropriately enough, the show kicked off with 'Welcome To The Party'.' an offerinf from the F lying Aces 'written on that day and recorded that night,. never to be performed again.'  Sadly, the Aces  founded by then- husband and wife team of Martin and George Ace -- were never to make it to vinyl again in their own right, though plenty of tapes have circulated.
The medal for the man in the most bands on the the goes to Deke Leonard who, having been sacked from Man, was filling in time before his own solo career took off. He'd bailed out Help Yourself when their mainman Malcolm Morley went into a ''Black Abyss' of selfdoubt, and the galvanising effect he had on the formerly laid-back band can be heard here in 'Eddie Waring'.  This was one of several/ riffbased numbers named after TV personalities: 'Ludovic Kennedy'  and 'Frank Bough'' were others.
Deke tried to make us into a 'name' had with titles like that.' explains guitarist Richard Treece. Morley eventually had a change of mind and rejoined,  leaving Deke free to found Iceberg.
Next up was Ducks Deluxe, a feisty four-piece who would go on to become stalwarts of the London pub scene and record two albums for RCA -- neither of which contained their contribution here. ''Boogaloo Babe'. The link with the Welsh fraternity was Help Yourself: Sean Tyla had both roadied and played with the band, while former Helps bassist Ken Whaley had been in their very first lineup.
The Jets and Plum Crazy were two seminal, though hitherto unrecorded, Swansea outfits from 1964-65 and 1968-69 respectively whose common factor was vocalist Plum Hollis. The Eyes of Blue (1964-69), who also played, didn't make it onto the album since two of their original lineup were otherwise engaged --  Gary Pickford-Hopkins with Wild Turkey, and John 'Pugwash' Weathers. a future Man drummer, with Gentle Giant.
Festivities were concluded appropiately, by Man with two guests sitting in. One was guitarist, producer and one-man-band Dave Edmunds who, earlier in the year. had lent his talents to their album 'Be Good To Yourself At Least Once A Day'.  The other, Stan Phifer, was, Deke Leonard later revealed, a local character who was in lots of Swansea bands.  He used to come up and do...well, it was hard to keep him off really!'
The spirit of  'Christmas At The Patti' has since been consciously evoked in the 1990's at three Welsh Conventions, organised by Man's information service, when various bygone groups have come to life for just one day. Yet the magic of the evening exists when any South Wales group sets foot on the boards, be it Man -- now about to celebrate their 30th Birthday --  the Archers. Featuring ex-Helps Richard Treece and Ken Whaley, or Clive John's Trembling Knees at any number of hostelries in and around Swansea.
Let's leave the last word though, to Treecey. 'Christmas At The Patti', he recalls, 'was an hilariously enjoyable day. Deke had helped to save a sinking ship. 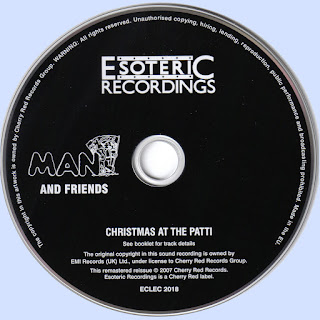