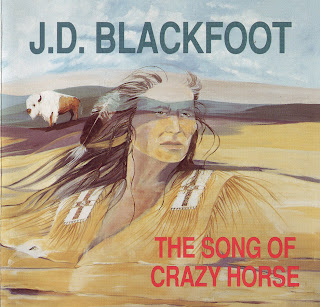 Blackfoot was born in Cleveland, Ohio, on May 9, 1944, but spent most of his early years in Columbus until age 8 when his father got an office job with the Atomic Energy Commission and moved his family to Oak Ridge, Tennessee. Oak Ridge was a very secret place in those days.

After graduating from high school, he joined the Maryland National Guard, but since he was again spending most of his time in Bladensburg, where he had few friends, he became something of a loner. Then, one Saturday, he was walking past a music store and saw a $78 Kay guitar and amplifier in the window and bought the package. He also purchased a chord chart. Immediately, he took his treasures home, learned three chords and wrote two songs before the weekend was over.

After he had mastered the Kay guitar enough to play tunes, Blackfoot and a buddy found a third player and formed a trio called the Starfires. The trio played one gig and broke up because the drummer moved to California. Music then became a private thing for the young man. He didn’t share it with anyone, didn’t attempt to join another group, just kept on truckin’ for the next couple of years with no particular direction in mind.

In 1965, his father died of a cerebral hemorrhage while on a business trip to Charleston, South Carolina, and Blackfoot’s mother moved back to Columbus, which is where his father was buried.

A short time later, the 21-year-old, who had no real ties in Maryland, headed for Columbus, too. Since there were no openings in the Ohio National Guard at the time, he transferred to the Air Force Reserve and served with an air police unit in Wilmington, Ohio, from 1966 until 1970.

So, in 1967, when Blackfoot was already 23 years old and had never performed in public except for that single gig with the Starfires, he learned that a local band called the Ebb Tides was looking for a singer/rhythm guitar player. The group was scheduled to do an 18-state summer tour of the county fair circuit.

In 1970’s “The Ultimate Prophecy,” which now demands top dollar if you can find a copy, was done in two takes over a single weekend at Mercury Recording in New York.

His second album "The Song of Crazy Horse" was recorded in New Zealand in 1973 and won New Zealand’s R.A.T.A. (Recorded Arts Talent Award) Album Of The Year award for 1974. The title track is a 20 minute saga about the life of the Oglala Sioux Chief Crazy Horse. It was released in 24 countries on the Fantasy label and to this day is still captivating new listeners around the world. The album received spotlight picks in Billboard, Cashbox, and Record World magazines. 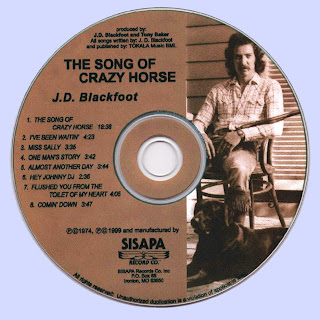