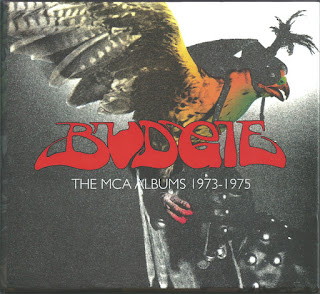 Welsh rockers Budgie may not have ever been the multi-million selling, stadium filling, mega stars like Black Sabbath (although they did headline the Reading Rock Festival in 1982), but the newly re-issued classic three albums between 1973 to 1975 – Never Turn Your Back on a Friend, In for the Kill, Bandolier – would go on to inspire many metal superstars of future decades. The impressive list who have namechecked or covered songs by this unassuming three-piece are Van Halen, Soundgarden, Iron Maiden, Megadeth and Queens of the Stone Age. But the band associated with enlightening Budgie to a younger generation of metalheads is Metallica and their cover of ‘Crash Course in Brain Surgery’ on The $5.98 E.P.: Garage Days Re-Revisited, released in 1987 to bed in the newly appointed bassist Jason Newsted, the replacement to the late Cliff Burton after the tragic coach crash whilst the band were touring Europe. They also went on to cover ‘Breadfan’ for the B side of single ‘Harvester of Sorrow’ the following year.

Originally formed in 1967, Burke Shelley (vocals, bass), Tony Bourge (guitar), and Ray Phillips (drums) under the name Six Ton Budgie before shelving the first two words to the shorter and snappier Budgie in 1968. A name of a small, seed eating bird is the antithesis to the band’s big compact amplified riff heavy assault sound. After releasing two albums, the self-titled debut (1971) and second album Squawk (1972), both of which are also worth exploring, it is with third album Never Turn Your Back on a Friend, released in 1973, that the accolades which followed mainly began here. The opening track alone, ‘Breadfan’, has one of the most colossal and memorable riff’s born outside of Tony Iommi. It also captures the many elements of the Budgie sound; the aforementioned jaw dropping riff and the quieter gentler acoustic section, which Budgie could interchange between so effortlessly and to such good effect.

‘Breadfan’ is the classic starting place to hear Budgie, but delve deeper and there is so much more to this band. Sandwiched in-between the harder metal edge of Black Sabbath, and the progressive explorations of Rush, they could wring emotion unlike many of their contemporaries, combining Burke Shelley’s glorious high shrieked wail and Tony Bourge’s guitar licks and riffs backed by a tight and very effective rhythm section. This they demonstrate on the breath taking and poignant ‘Parents’ from the said 1973 album.

Prior to the recording of their fourth album In for the Kill original drummer Ray Phillips left and was replaced by Pete Boot. An album which arguably could be their best turned out to be their most commercially successful, claiming a top 40 album chart entry peaking at number 29 in the U.K. charts. It elevates the harder rocking edge of their sound kicking in with the guitar squealing intro title track, plus the riff heavy driving force of ‘Crash Course in Brain Surgery’, and ‘Zoom Club’, all are fully charged proto-metal romps and leaves no surprises why they are name checked by so many metal bands.

The in 1975 released, and second highest album chart position at number 36, Bandolier, boasts riffy rockers ‘Breaking All the House Rules’, and ‘I Can’t See My Feelings’, the catchy defiant singalong of ‘I Ain’t No Mountain’, while the closing track ‘Napoleon Bona, Pts 1 & 2’ has an opening acoustic gentle sway before turning into a metal chugging powerhouse classic.

Also, they have their own distinctive bird fronted album cover illustrations in which Squawk and Never Turn Your Back on a Friend were designed by iconic artist Roger Dean (Yes, Uriah Heap, and more recently Black Moth’s second album Condemned to Hope), to set them visually apart and handy to the purchaser while flicking through stacks of bulking record shelves (oh, those were the days). Another vital element is the original, and in some cases, intriguing song titles for example, the eye-brows raising, wince inducing erotica of ‘In the Grip of a Tyrefitter’s Hand’, and the equally odd and squirming simile ‘Hot As a Docker’s Armpit’, as well as ‘You Are the Biggest Thing Since Powdered Milk’, the wonderful imaginative imagery of ‘Nude Disintegrating Parachutist Woman’ along with the first track on the self-titled debut album ‘Guts’, are my particular favourites.

Yes, there are a few standard bluesy rock tracks which prop up here and there, but remember this was in the early 70’s. But as they carried on into the 1980’s with John Thomas (who sadly passed away earlier this year) replacing Rob Kendrick (ex-Trapeze) in 1979, who had in turn succeeded Tony Bourges in 1978, it was their influential heavier side the band relied on in a live setting in which I saw them deliver a fantastic set of their classic hard rock/metal repertoire in the mid/late 1980’s at Hammersmith’s Clarendon before splitting in 1988. The band continued to reform and part ways several times after in the proceeding decades. So, anyone interested in hard rock of this said period or metallers who want to explore the roots or more importantly, just want to enjoy a fine huge slab of hard rock and heavy metal should invest in, or at least check out, these influential albums by a very inspirational band.
by Andy Little, 2016 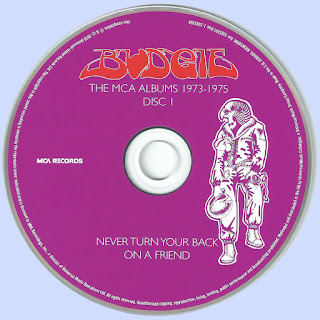 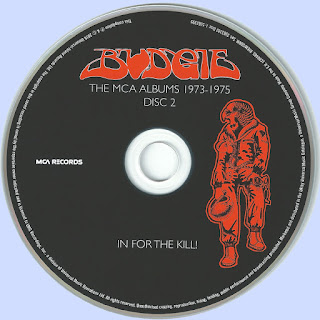 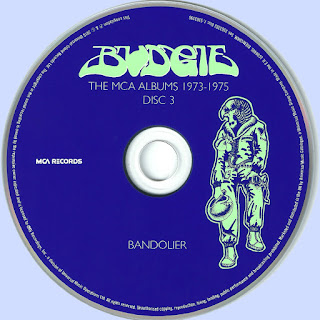