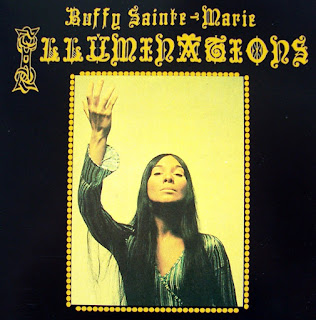 Beginning with 1967’s Fire & Fleet & Candlelight, the music of Cree folksinger Buffy Sainte-Marie began to take on a decidedly schizophrenic nature. Traditionally celebrated for her biting political songs, as well as her stark approach to folksong, the late sixties saw her take her distinctive sound in a series of surprising directions. Candlelight experimented with sweeping orchestral arrangements and electric pop music, while its follow-up, I’m Gonna Be A Country Girl Again, saw Buffy immersing herself deep in Nashville traditions. Come winter, 1969, and the young firebrand decided to turn the tables once again, releasing what is perhaps her most esoteric album of all: Illuminations.

From the very first notes you know you’re in for something unique. “God Is Alive, Magic Is Afoot” is an eerie, electronically treated adaptation of lines from Leonard Cohen’s novel Beautiful Losers, featuring bizarre production touches courtesy of Vanguard Records president Maynard Solomon himself. Buffy’s voice and guitar are taken and warped into distorted moans and oscillating loops of sound that build upon themselves into a kind of electric witch’s chant. I should warn you not to get too comfortable with all this, though, because if this record is anything, it’s unpredictable. After almost five minutes, this unsettling opening fades into the short, church organ hymnal “Mary,” before a gnarly electric guitar and banjo jerk into the rapid-fire folk-rock of “Better To Find Out For Yourself,” featuring Buffy at her yelping, wailing best. In the clucking fadeout, what might return but Solomon’s electronic screeching, teasing the record back down into a dark, candlelit vampire ballad.

Honestly, I could go on for the entirety of the track list like this, as every song here is  indispensable to the whole. In fact, I’m almost tempted to label this one a concept album, with the opening track acting as a sort of manifesto. As for the music, though, it’s everywhere, from the raw west coast psychedelia of “He’s A Keeper of the Fire” to the caustic “Suffer the Little Children,” which itself sounds straight out of one of Buffy’s earlier records. One of the most wild segments is when the stomping “With You, Honey” closes with a shrill scream and dissolves into the pretty, lilting acoustic love song “Guess Who I Saw In Paris.” This latter track is so overly cute that in any other context I might write it off as a low point, but in context with the rest of the music here it somehow comes off as extraordinary. Like the rest of the album, it’s hard to really put the magic into words. This is one you just have to experience.

Interestingly enough, this album was not only groundbreaking musically, but it was also the very first quadrophonic vocal record ever made. Unfortunately, it appears that few people cared about either of those two points at the time of its release, as it was a huge commercial disaster and would quickly be deleted from Vanguard’s catalog. If you can, I would recommend you all find a vinyl copy, since this seems like the kind of record that was born for the needle, but should that fail there’s always Vanguard’s compact disc reissue. Also worth checking out is Buffy’s follow up to this one, She Used To Want To Be A Ballerina, which, of course, sounds little like Illuminations, but does feature Jack Nitzsche and the original lineup of Neil Young and Crazy Horse.
by Nik Rayne 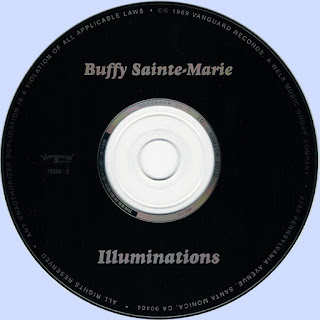 Free Text
Text Host
Posted by Marios at 11:55 AM 2 comments: