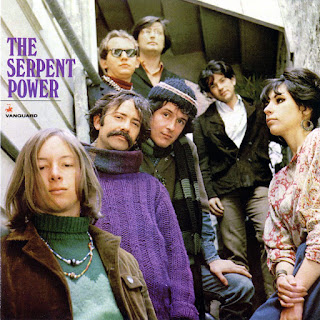 The Serpent Power were amongst the many bands that emerged during those heady days of 1967 but, unlike many of their contemporaries who went on to build solid careers, their arrival was only to be a brief spell in the sun as this delightful album was to prove their sole release as a full band. There is no doubt that it stands proudly alongside other better known works of that time.

The group was formed by David Meltzer and his wife Tina, intending for it to be a vehicle for his poems. David had recently had a volume of his poems published by Oyez as The Dark Continent, some of which are reproduced in the notes for this CD reissue, and with this new venture he was very much in the driving seat writing all the music and lyrics and playing guitar and harmonica as well as sharing the vocals with Tina.

The album is linked to the sunshine pop and folk-rock genres on at least one internet site, but it was certainly not following those commercial labels despite the group containing two ex-Grass Roots in Denny Ellis and David Stenson. Rather it is representative of that small group of releases (including Fairport Convention's first album) which were genuinely seeking new musical forms. Perhaps most closely rooted in folk, they were following some of the same paths that acts like Country Joe & The Fish and early Jefferson Airplane were moving along. They were electrified but in a restrained way, and they were intent on letting the lyrics carry the songs rather than over-complicating them with any vocal arrangements. The end result quickly marks this out as a lost gem of the period.

Opening with the upbeat organ-led ‘Don't You Listen To Her’, arguably the most commercial track, they then move to ‘Gently, Gently’, a lovely quiet song led by Tina that is very reminiscent of early Fairport as it drifts on restrained drums. The organ returns effectively on the mid-tempo ‘Open House’, before Tina again leads on the relaxed and summery ‘Flying Away’ that features some beautiful guitar work. ‘Nobody Blues’ offers strong lyrics against adventurous blues guitar lines, while ‘Up And Down’ and ‘Sky Baby’ both have a Lovin' Spoonful feel to them. ‘Forget’ and the short ‘Dope Again’ continue the adventurous work before ‘Endless Tunnel’ closes the album. At over thirteen minutes, this was their obligatory-for-the-period long track, and they carry it off far better than most, with it being enhanced by the fascinating raga-like electric banjo work from JP Pickens

They had played their first gig, a benefit for the Telegraph Neighbourhood Center, in November 1966, and struck lucky as there they were spotted by Country Joe & The Fish's manager, ED Denson, who immediately recommended them to Vanguard Records where they worked with producer Samuel Charters. However the release suffered from limited distribution and they never managed to break out of their immediate San Francisco area, leading to the group breaking up in 1968, leaving us with a major 'what might have been' question.
Ace-Records

Tina and David Meltzer were the mainstays behind the short-lived, but quite talented Serpent Power. Produced by Sam Charters, "Poet Song" offered up an odd mixture of spoken word poems and artsy folk-rock material.   While marketed as a duo, the album largely served as a showcase for David.  In addition to writing all 15 selections  (both the poems and songs), he was also credited with lead guitar and handling about half of the vocals.

Tina clearly had the better voice, so it shouldn't come as a major surprise to discover she was responsible for most of the highlights. Those included the martial 'I'm So Willing' (kind of a proto-feminist ballad, 'Hymn To Love' and 'Pure White Place' (the latter sounding like an early Jefferson Airplane outtake).
Bad-Cat 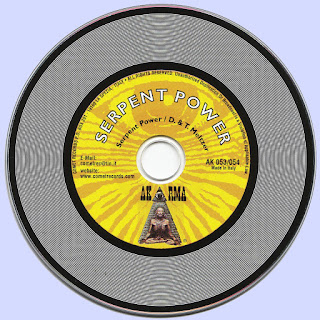 Free Text
Text Host
Posted by Marios at 9:18 AM 4 comments: