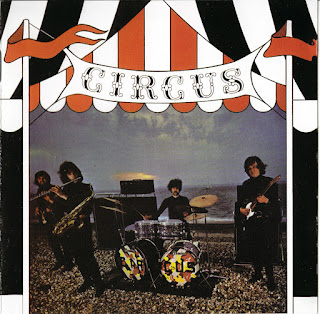 The term ‘pioneer’ seems perfect to describe the early achievements of the Transatlantic record label. They imported blues, folk, and jazz from the States and provided an outlet for a whole wealth of otherwise 'impossible to get' music to the UK market.

Within a year or two of their birth in 1961, they began to record new British sounds and led the way in the growing folk and blues movement of the latter half of the sixties. By 1969 the fiercely independent label’s eclectic philosophy had seen them releasing records in rock, pop, and even ragtime.

It was the debut eponymous album from UK band Circus in 1969 that saw them venture into the progressive rock world. This highly collectable album has now been re-released on the Esoteric Recordings label, having been re-mastered, and appears with extensive and informative liner notes.

The newly re-named Circus had already achieved chart success under the cumbersome moniker of Philip Goodhand-Tait and the Stormsville Shakers. It hardly rolled off the tongue, and as the late sixties arrived they sensibly changed their name.

Two singles produced by Manfred Mann’s singer Mike D’Arbo faded into obscurity. But their song “Gone Are The Songs Of Yesterday” was covered by Love Affair on the flip side of their hit single “Everlasting Love.”

When Goodhand-Tait left to write more material for Love Affair, Circus decided to move away from the singles market and go into more experimental territory.

It would be impossible to try and list everyone that Mel Collins has played with over the years. Names such as The Rolling Stones, Eric Clapton, King Crimson, Camel, Caravan, Humble Pie, Uriah Heep, Dire Straits, Bad Company, and many more, spring to mind.

Back in 1969, Circus were busy developing a jazz fusion style. This was a period that saw the rise of bands such as The Nice, Soft Machine, Colosseum, and the newly formed King Crimson. In the album notes Mel describes the period by saying, “it was a very creative time where you were allowed to experiment. There wasn’t a formula you had to stick to.”

When Transatlantic stepped in and signed Circus the Guildford band quickly found themselves in the studio with producer Ray Singer who had achieved success with Ray Sarstedt’s hit “ Where Do You Go To My Lovely.” In just two days the band went through their established live set, while Singer did his best to capture the band’s spirit in the time allowed.

The album sold well and has subsequently become something of a sought after collectors item. It is also best remembered for its two cover songs, The Beatles “Norwegian Wood,” which opens the album, and “Monday, Monday,” a huge hit for The Mamas & The Papas.

“Norwegian Wood” takes the song to a whole new level, not always a popular thing to do amongst Beatles purists. Having said that, this cover is bravely and successfully innovative. If anything, it takes the song along a logical path. Ian Jeffs even sounds Beatle-esque with his vocals. But it’s the jazz elements that lift the version on high building towards a soaring crescendo before regrouping along original Beatle lines. It’s a stunningly effective opener.

The next track, “Pleasure Of A Lifetime”, written by Mel Collins, is a gentle meandering and melancholic track that features his father Derek on alto-flute. The upbeat “St. Thomas” arrives with its ‘live extended free form jam’ flavor and features some excellent flute playing by Mel Collins.

The all too brief “Goodnight John Morgan” takes us easily into late night jazz. You can see the swirls of cigarette smoke and the lonely guy at the end of the bar staring into his empty glass on this one. Mel’s “Father Of My Daughter” recaptures the melancholic feel of earlier with another gentle breeze of a song set above acoustic guitar and flute.

The up-tempo theme-tune feel to the instrumental “II BS” leads into the well chosen cover of “Monday, Monday.” The album closes with one of its highlights, the laid back of ease of “Don’t Make Promises,” which slowly opens out into something quite special as Mel once again shows his flute expertise.

Sadly , it was to prove the last track released by Circus. When the band began to write material for a second album they were simply unable to deliver and the band folded.

Largely forgotten over the years, save for those buyers of collectable vinyl, Circus’s debut album has finally been given the makeover it deserves. In part it is very much of its time. Yet there remains something fresh and alive about the recording that make it an enjoyable and rewarding trip.

Maybe this was, in part, due to the manner of its recording as a mainly ‘live’ studio album. Either way, the high quality of the musicianship is evident from the very first bars of the brave statement that is “Norwegian Wood.” If only they could have come up with some more.
by Jeff Perkins 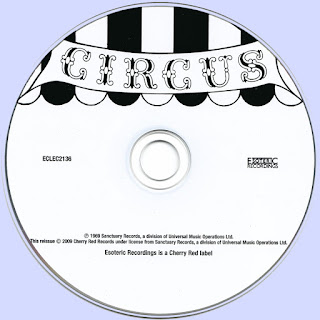 Free Text
the Free Text
Posted by Marios at 5:17 AM 2 comments: