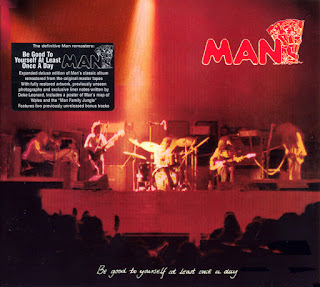 This is generally considered by Man fans to be one of the band's best works. Produced during one of Deke Leonard's periods of absence, it saw Phil Ryan and Will Youatt welcomed into the fold. There had been a huge amount of touring going on around this time, much of it on the continent, and this is the period they really established a solid reputation as a live band, and evidence to back this up was clear in the form of the many live albums (and bootlegs!) that came out of this era.

There are just four tracks, which probably reflects the serious jamming that was going on while performing live, allowing space for individual soloing. Also, it made it easier to fit in the quieter passages, such as in C'mon, where there is some especially effective organ and electric piano form Phil. Keep on Crinting further explores this laid back groove, which at times takes on an almost pastoral feel. Mellow picked guitar, steady, simple drumming, and cool synth sets this mood, before giving way to more aggressive wah wah.

Bananas became an immediate favourite and remains one to this day. The studio version is pretty much an organ driven piece and though the guitars make their presence felt later on, the organ does give this original version a sound not really reflected in the way the song developed in later years when performed live.

Life On The Road I see as the weakest song on the album. If you like shuffles, fine, but to me it's pretty nondescript. It was part of the live set for a while, but I can't work out how this studio version could have been thought to have advanced Man's cause as being a major act.

The playing throughout is excellent. As already hinted, it's very keyboard driven, and not having Leonard on board meant there was not as much of a contrast in guitar styles as in other band versions. Terry Williams... simply does not know how to play badly. The easy, relaxed style of this album never seems to stretch him though, which is a bit of a shame.

Time to own up : this actually isn't one of my favourite Man albums. It sounds like the band had got carried away with their live successes, and came out of the studio with an album which might just as well have been recorded on stage. I don't think it's a coincidence that the cover photo is a live shot (unusual in itself for a studio album). There's not much wrong with the songs, but nothing really stands out as having been crafted, and no effort seems to have been made to take advantage of the sophistication of the recording facilities. Of course, when they came to Rhinos, I think someone had noticed this tendancy, and they perhaps over compensated. Whatever. Anyway, for me this is a bit of an underachievement - the material is there, but more effort could have been put into the presentation.
Man-Band 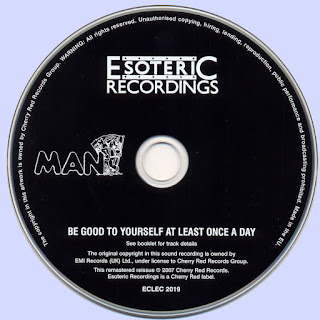