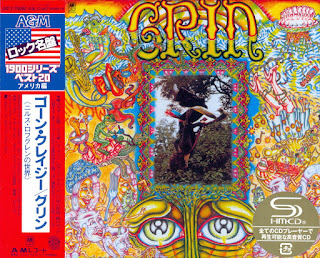 After touring with Neil Young while still a teenager, singer, songwriter, and guitar hero Nils Lofgren formed the band Grin in 1969 with bassist Bob Gordon and drummer Bob Berberich. While his credentials as part of Young's entourage certainly attracted a few people to the band's early shows, Grin rapidly built a fervent audience of its own in the Washington DC/Northern Virginia area based entirely on the band's dynamic performances and Lofgren's six-string pyrotechnics.

Lofgren further parlayed his connection with Young into a record deal for Grin, and the band released its self-titled debut in 1971. Grin's sound was simple, no-frills, guitar-driven rock 'n' roll with pop overtones and catchy melodies. Although the debut album didn't set the world on fire with sales, it did well enough to merit a follow-up, and in '72 the band released 1+1. The album's lone single release, a clever slice of power-pop called "White Lies," would become a minor hit on AOR radio, rising as high as #75 on the Billboard magazine pop chart and propel the album onto the bottom end of the Top 200 album chart.

To help flush out the band's sound, Lofgren added his brother as a second guitarist after the second album, Tom Lofgren playing rhythm behind Nils' scorching leads. In 1973, the band released All Out, another fine collection of songs that rose almost as high as 1+1 on the charts, but yielded no singles, hit or otherwise. Disappointed by the band's lack of forward commercial momentum, CBS dropped Grin, who would quickly be picked up by A&M Records.

Gone Crazy would be the result, Grin's fourth and final album, released in 1973 and sadly suffering a fate similar to its predecessors. Many consider Gone Crazy to be Grin's weakest album, but I'd disagree – the band's four-album milieu is uniformly and consistently enjoyable. Grin's infectious pop/rock sound was a welcome digression during the hard rock early 1970s, and if Lofgren and crew could easily bang it out with the heaviest of their contemporaries, they also possessed an elfin charm and whimsical nature that sets their music apart from much of the decade's better-known bands.

Gone Crazy opens with a fierce rocker, "You're The Weight" offering up a concrete-hard guitar-bass-drum riff on top of which Lofgren lays down his potent vocals and measured wildcat solos. The song is as infectious as anything Grin had done previously and, in many ways, foreshadows Lofgren's soon-to-come solo debut album. The band slows it down a bit for the mid-tempo ballad "Boy + Girl," which features as much of Lofgren's keyboard skills as it does guitar. With trilling piano play that sounds like an old-timey, Western saloon soundtrack, Lofgren tries on his best blue-eyed soul shoes, the song engaging and hiding just a bit of nasty funk beneath the grooves.
"What About Me" returns the band to solid rock territory, Lofgren's wiry fretwork running like an electrical charge across the song's exotic instrumentation. While Lofgren's vocals here are a little more strained, they fit the chaotic feel of "What About Me," with the rest of the band throwing in their own shouted harmonies. Lofgren delivers a scorching solo at just past the two-minute mark, short and shocking and simply devastating while his grinning (sorry!) band members knock out the wild-n-wooly rhythms behind him.

"True Thrill" is a bouncy, pop-influenced tune with a slippery rhythmic arrangement, Nils' trademark guitarplay, a little vocal harmony, and some very fine basswork by Gordon. With a little label push in the right direction – perhaps a judiciously-placed $100 bill in the sleeve for a few station programmers – and the song could have been a hit on both AM and FM radio. By contrast, "Beggar's Day" (Eulogy to Danny Whitten)" is a blistering rocker and strictly FM radio fare. Written for his fallen Young bandmate Whitten, it is lyrically one of the best songs Lofgren has written, with powerful instrumental backing, passionate vocals, and some of Lofgren's nastiest guitar solos.
The gentle ballad "Believe" is the closest that Gone Crazy comes to a clunker, the piano-heavy tune relying too much, perhaps, on Lofgren's still-maturing keyboard skills and too little on his six-string mastery. Lofgren's vocals are slight, sometimes too sweet, and the band harmonies are simply precious, and the lyrics come from a solidly romanticist perspective, but the song could have benefitted from a little guitar grit. The album ends with "Ain't For Free," a bluesy mid-tempo honky-tonker that smolders in the grooves and features a different side of Lofgren's guitar skills.

After touring in support of Gone Crazy, Grin would break up in 1974 and Lofgren would stay with A&M Records, delivering his critically-acclaimed self-titled debut album a year later, fully launching a successful and varied career that is still going strong today. Although the Grin chapter of Nils Lofgren's musical history has been obscured by his later work, it's nice to once again hear the underrated Gone Crazy, one of the true hidden gems among the band's sparse catalog.
by Rev. Keith A. Gordon 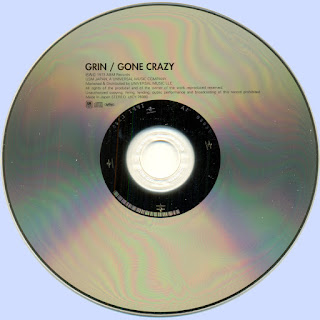 Free Text
the Free Text
Posted by Marios at 3:17 AM 2 comments: