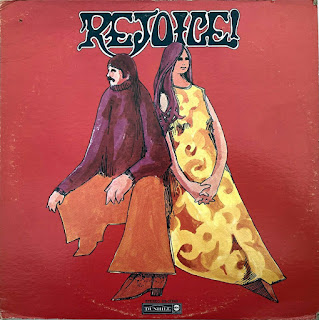 Rejoice was a band made up of guitarist Tom Brown, bass player Nancy Brown, pianist Dick Conte and drummer Michael Patrick Moore. They were from Marin County, north of the Golden Gate Bridge. The Browns’ were a husband and wife duo and their harmonies bear strong echoes of the coffee house folk circuit blended with the gentle, hazily psychedelic Bay Area sounds of the day. Rejoice was signed by Jay Lasker, then president of the Dunhill label. Rejoice originally went into the studio with Terry Melcher as producer in April 1968. Melcher was the only son of singer Doris Day and he had previously produced the Byrds albums Mr. Tambourine Man and Turn, Turn Turn. Melcher also had produced all the albums for Paul Revere & The Raiders from 1965 to 1968, including their string of hit singles from “Just Like Me” to “I Had A Dream”. Melcher had also been the producer of the Monterey Pop Festival in June 1967. Rejoice were very excited to have Terry Melcher in place as their producer.
While in the middle of recording the third or fourth song on the first side of the Rejoice album, Melcher’s father passed away and Terry was gone for about a week. Eventually, the band went back to Marin County. Months later, Tom and Nancy Brown, the singers and main songwriters, went back to Los Angeles with Steve Barri as producer and completed the Rejoice album. Bari was a successful producer for The Grassroots, most of Mama Cass’s solo career hits, Tommy Roe (“Dizzy”) and Alan O’Day (“Undercover Angel”). Rejoice used the following studio musicians to complete the album: drummer Hal Blaine, bass paler Joe Osborne and pianist Larry Knechtel. Hal Blaine and Larry Knetchel were both studio musicians with the legendary Wrecking Crew from Los Angeles.
The Rejoice album was released in January 1969 and a single co-written by Nancy and Tom Brown, “Golden Gate Park”, spent one week on the Billboard Hot 100 at #96. This was mostly on the strength of the tune climbing to #10 in San Francisco and #20 in Seattle. It was a fine example of the sunshine pop tunes populating the charts in the late 60’s. The second single from the album, written by Tom Brown, was “November Snow”.
May 23-25, 1969, The Aquarian Family Festival, a free concert, was held at a Football practice field across from San Jose State’s Spartan Stadium. The event was held in conjunction with the Second Annual Northern California Folk Rock Festival at The Santa Clara County Fairgrounds. All the bands played for free. The organizers called every band they knew and a lot of them showed up. The agreement with the College stipulated that people could only be present when music was playing. So performers played continuously for the entire 72 hours. A specially constructed stage allowed one band to set up while another played. Bands would show up at the site and sign up similar to signing up for a game on a tennis court. Besides hippie solidarity, playing a free concert was a good way for a local band in the Bay Area to get known. Up to 80,000 concert goers attended the Festival. Aside from the big headliner, Jefferson Airplane, for many of these groups like the Steve Miller Band, this would have been the biggest crowd they had played for in their music career so far. One of the bands performing at The Aquarian Family Festival was Rejoice. They played their first two singles as well as their final single from their album, “Sausalito Sunrise”, also written by Tom Brown.
With no commercial success, later in 1969 Rejoice broke up, with members pursuing different musical directions.
by Ray McGinnis, October 5, 2017 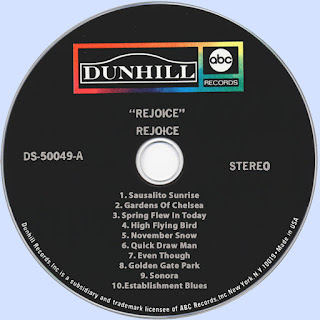