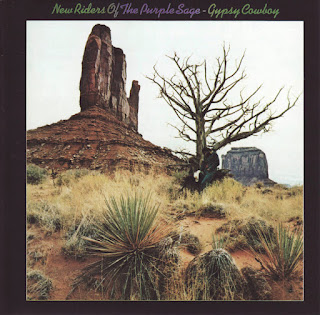 Gypsy Cowboy was the New Riders of the Purple Sage's second album of 1972, released only seven months after its predecessor, Powerglide, and was also the group's third album in 15 months, which may help explain why the original material, written separately by John Dawson and Dave Torbert, was not impressive. Dawson as usual contributed some twangy country-pop including romantic tributes and reminiscences about the Gold Rush and bootleg whiskey, but nothing really memorable.

(His eight-minute "Death and Destruction" provided opportunities for David Nelson to play some stinging electric guitar leads, even if it was essentially a rewrite of Neil Young & Crazy Horse's "Down by the River.") Torbert's contributions were even slighter, from his spacy title song ("Let's roll another number") to the by-the-numbers rocker "Groupie." And the New Riders continued to seem like inferior interpreters of others' songs, as their take on "Long Black Veil" was generic country-rock.

The band had almost completely spun off from the Grateful Dead by now; the only contribution from the parent act was the appearance of Dead singer Donna Jean Godchaux on backup vocals on a couple of tunes. Gypsy Cowboy did not demonstrate that they couldn't ride alone, but it did suggest that they ought to pause and come up with some first-rate original material before entering the recording studio again, something they proved unable to do. [The 2007 reissue of the album by Wounded Bird Records added four previously released live versions of the songs, three of them culled from the 1974 LP Home, Home on the Road, produced by Jerry Garcia.]
by William Ruhlmann 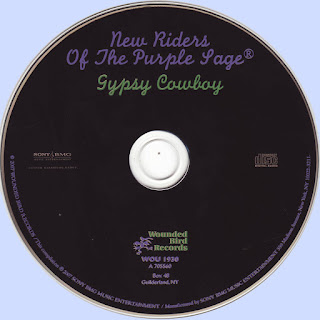 Free Text
the Free Text
Posted by Marios at 11:55 AM 2 comments: