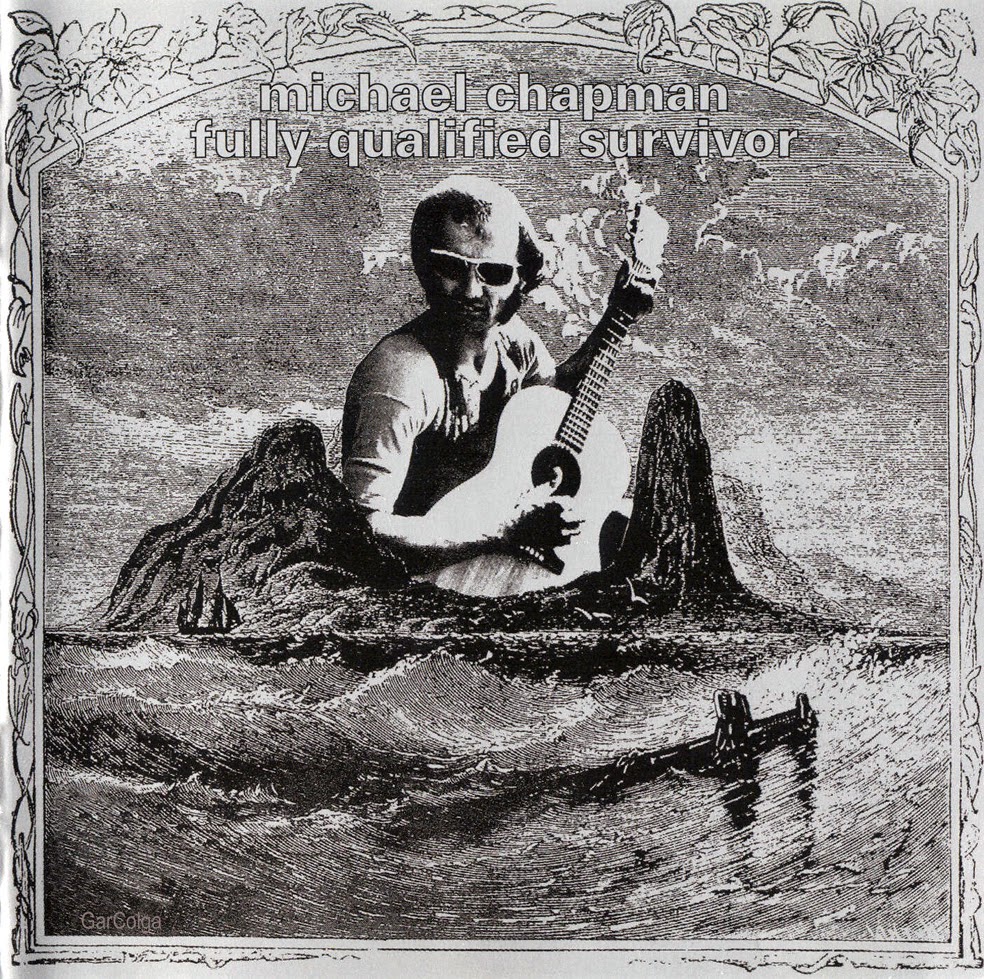 Michael Chapman’s first four albums came out on Harvest Records, an EMI-run British label that served as a hot bed for the psych-folk scene. It was home to, among others, Pink Floyd, Syd Barrett’s solo work, and fellow prog-folk singer Roy Harper—whose own 1971 album for Harvest, Stormcock, is a masterpiece. If you’re looking for a comparison to Chapman’s sound, Harper is as close as you’ll get, at least in some ways. The first track on Full Qualified Survivor, “Aviator”, does little to break that comparison. It’s a nearly ten-minute epic, as moody and wandering as anything on Stormcock, though if you’re looking for an album of huge suites, it’s a bit of a red herring.

After that huge, excellent, opening, Chapman continues to develop his own deep, vibrant sound. “Aviator” sets it all up for you; once you set aside the heft, you’ll hear how it falls right in line with the other, tighter songs that follow. We get Chapman’s smoky rasp of a voice, his subtly intricate guitar playing, and his eye for a sharp line, a sinister bark, and a striking detail. It’s a stunning piece about isolation and paranoia—everyone seems to be coming from all angles to “take [his] time away”, and you can feel the world closing in on him, not only in his weary voice but in the silence on the other end of a ringing phone or the stones thudding on the roof.

The solitary feel Chapman establishes is nothing self-pitying or fey. There’s bite to these songs. You can feel him sneer when, say, someone tries to make a fool of him in “Stranger in the Room”. “You made your snide remarks”, he snaps, nearly spitting out the words. Even “Postcards from Scarborough”—a much sweeter bit of melancholia and the closest thing Chapman had to a hit—finds him mourning a lost love while still scowling at his memories themselves. “The food was so tasteless, the wine was so stale”, he growls, remembering his days alone.

The lyrics are fully realized here, as well written as they are well delivered, but Fully Qualified Survivor is excellent because it is just as dynamic musically. Where other folk singers would rely on the acoustic guitar (and maybe some swelling strings or go the other route, the way Harper could) over building their songs with drifting layers, Chapman’s sound may align with the folk movement, but it is rock and roll at heart.

Chapman enlisted some Grade-A players for the record, including guitarist Mick Ronson. This six-string legend would also later work with Elton John and was of course part of David Bowie’s Spiders from Mars on top of having his own solo career, but his work on Chapman’s record is revelatory. Check the swelling run-ups that burst out of “Stranger in the Room”, not to the mention the solos. The thick riffs he drops on “Soulful Lady” are downright funky, while his gentle, distant work on “Rabbit Hills” adds an intricate layer of depth to Chapman’s already weary vocals. The sharpness of his guitar playing worked well with the complex basslines of Rick Kemp—the unsung hero of the record—who circles rumbling notes all around Chapman, giving the whole album a mossy rock feel we wouldn’t hear again—at least not at this brilliant level—until Neil Young’s On the Beach in 1974.

Chapman leaves plenty of room to show off his own chops, of course, and mixes up the mood and tempo of the record with a series of solo acoustic interludes. His playing on these is lightning-quick and arresting—particularly the bright “Naked Ladies & Electric Ragtime” and the stunning slide work of “Andru’s Easy Rider”—but it’s how these pieces manage to fit well in the seams between these full-band songs that makes them all the more striking. Fully Qualified Survivor is, well, just what its title claims. This is an album more than worthy of being unearthed and of being appreciated anew. It avoids sounding like anyone else—and, let’s be honest, the early-70’s singer-songwriter camp can feel a bit homogeneous. It also avoids the over-sentimental schmaltz in which some of his peers indulged (another occasional drawback to that crowd).

In a time where we’re constantly trying to recapture sounds from the past, any past, it’s great to stumble upon the genuine article, something that came before and that did all the things people are still trying to do. It’s heartfelt. It’s dark. It’s intricate but immediate, rocking but lush. It does all those things at once, and it does them better than most artists could hope to do any one of them. So is Fully Qualified Survivor a lost classic? Is it a reason to rethink Michael Chapman’s place in folk and rock music? To both questions: A resounding hell yes.
by Matthew Fiander 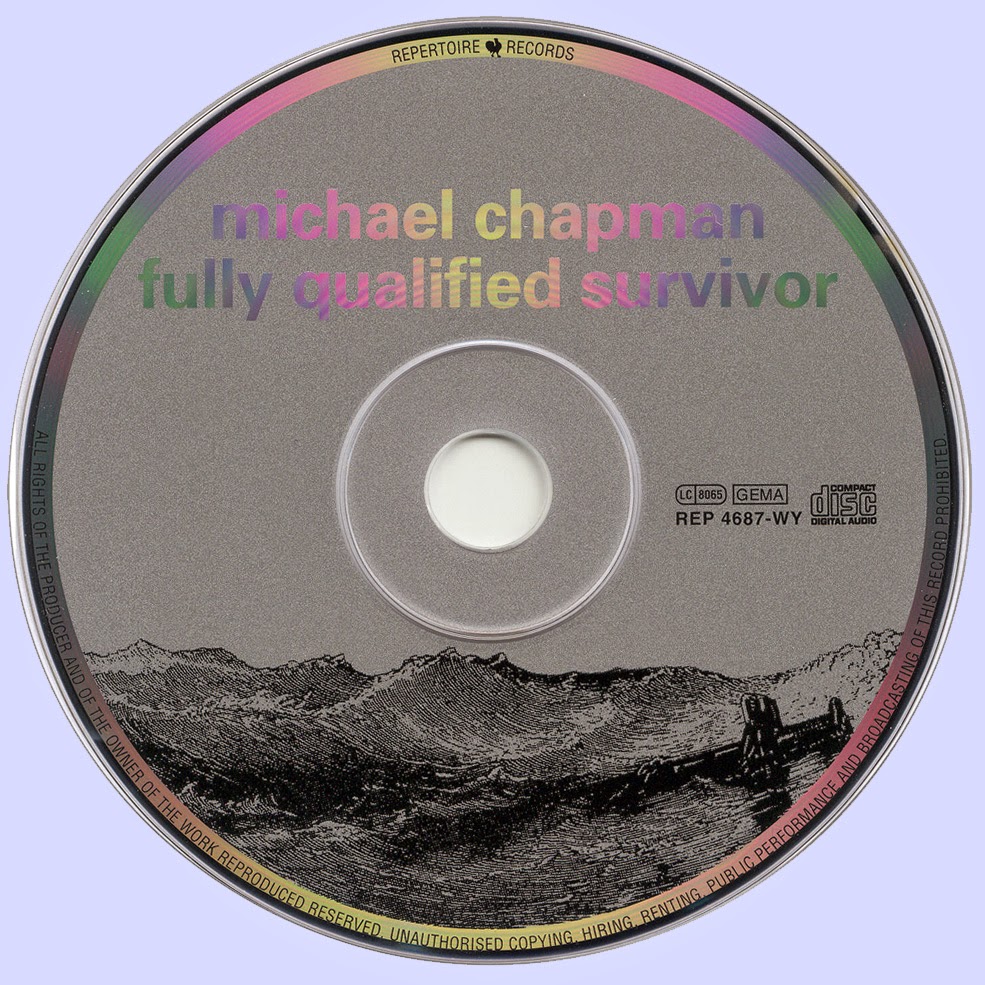 Free Text
Text Host
Posted by Marios at 5:03 AM 7 comments: