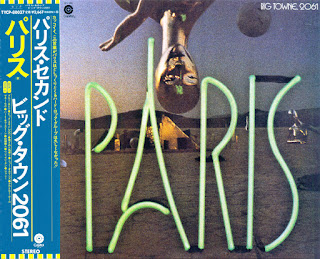 "Paris" was the band that I started with Glenn Cornick  after I left Fleetwood Mac. I had wanted to try doing some heavier rock , like Led Zeppelin was doing at the time.  During the last six months of 1974 , while touring with FM , I had been spending a lot of my off time talking to Jimmy Robinson who was an engineer that we had met while working either at Larrabee Studios , or (more likely) the Record Plant studio in LA. I think it was Jimmy who suggested Thom Mooney , who he knew. (ex-Nazz and Todd Rundgren drummer). Glenn Cornick was also between bands , and since we knew each other pretty well (he had been married to an ex girlfriend of mine , Judy Wong) I asked him if he wanted to start a hard rock trio.

I think Glenn and I came up with the name "Paris". For one thing , I had lived and worked in the actual city of Paris (the French one , not Tennessee) and Glenn Cornick and I had first met when he was playing a gig there with Jethro Tull. Also , by the name Paris , we wanted to imply that , although this would be a "hard rock" trio , it would have a certain level of refinement and not just be" headbangers " Glenn and I both wanted to do something along the lines of what Led Zeppelin was doing. I personally wanted to rock a little harder than I had been able to do with Fleetwood Mac. Lucky for me, Fleetwood Mac was taking off at the time with the "White" album , which would contain their 1st ever # 1 single. That meant that there was a fair amount of interest in me as an ex FM member.

John Carter at Capitol records was the one who finally bit the bullet (after a couple of passes) and gave us a demo budget. Capitol liked the demo  and Al Cory decided to sign us. That was about the last of the smart moves Paris ever made. We cut the record up at the Record Plant studios in Sausalito CA , a beautiful location by the bay, in the "pit" , which was a studio built especially for Sly Stone by the Record Plant owners, Chris Stone and Gary Kellgren. The "pit" was very unusual at the time ; it had no glass wall between the control room and the players space as was customary (and necessary because of leakage). The walls- floor to ceiling- were carpeted in bright maroon plush , and you could play or sing plugged in "direct" into the console while you were lying down.

The "pit" also had a couple of bedrooms with microphone jacks in the head boards , so Sly, or whoever was in the bed could do vocals while under the covers. It really was the height of '70's "over the topness"... Once I woke up and the clock said "2". I thought, "oh , I'm late , it's 2pm and we better get started". I peeked ouside for a minute, and realized it was 2 am , not 2pm. I had been asleep for 24 hours. Yes, there were lots of drugs at those sessions. I especially remember a Bayer aspirin bottle full of coke, that was constantly replenished ( from the album budget !!). And Gary Kellgren was a big fan of nitrous oxide , of which there were tanks aplenty.

Every so often a little opium would appear from somewhere. In 1975, Sausalito California was overrun with drug dealers. It was still considered fashionable and chic to do coke. If you didn't pull out your little bottle and offer some around, you were considered to be rude and ungracious. Half the time I didn't know what day, or what hour of the day, or even what month it was. Let me be clear here; Glenn Cornick never did drugs, that I know of. Neither did Thom Mooney. I was a bit more prudish than some of the real " heroic imbibers" ( who I won't name) . I was a "nothing till after the 5 o'clock cocktail hour" type of guy. Maybe that's one reason why I'm still alive... In retrospect , with Paris , I was in too much of a hurry . We probably should have let the band develop a little further , tour constantly, and find an audience.

As it happened, Hunt Sales came down with a case of Bells Palsy  (which paralyzes your face muscles), and we had to go on a long break. In that interval, I wrote "French Kiss"...and Paris just sort of faded. If the 2nd Paris album "Big Towne 2061" had done a little better, and/or we had stayed on the road.... who knows.......?
by Bob Welch 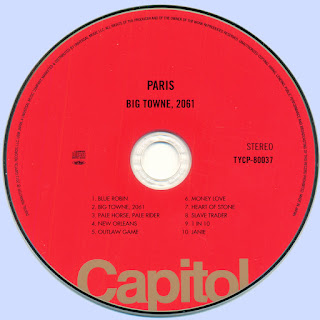