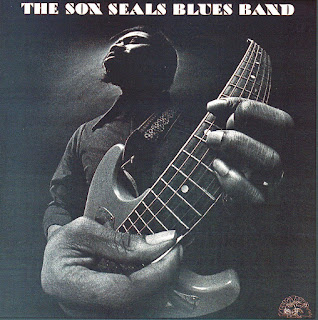 Chicago's Jazz Record Mart can be a very sleepy place late at night. The last customers gone, and one weary, restless and slightly bored clerk behind the counter, listening to old albums and waiting for closing time. Outside it's hot and still, and inside I'm trying to work up just enough energy to sweep the floor. Then, a phone call. The voice is Wesley Race, one of Chicago's most dedicated blues fans, calling from the Flamingo Club at 53rd and Calumet on the South Side. "Bruce, now I want you to listen," he hollered over the background noise, and turned the phone toward the bandstand. I thought I knew every bluesman in town, but this was something new, and something special—an incredibly fast, raw lead guitar and an urgent, intense singer. I must have listened ten minutes before I shouted back, "Who the hell is that?" "That? That's Son Seals."

Son is one of a whole new generation of black blues musicians, a generation hidden in the big city ghettos and the small towns of the Deep South. Bluesmen who remain almost unknown, because most major record companies would rather record their white imitators, and the smaller labels they record for (if they record at all) can't afford to promote them. Bluesmen like Jimmy Dawkins, Alvin Nichols, Big Voice Odom and Vemon Harrington in Chicago; Little Beaver in Miami; Luther Allison in Milwaukee; Hi Tide Harris and Dave Alexander in San Francisco; Frank Frost and Charles Berry in Mississippi; Little Sonny in Detroit; Bee Houston and Phillip Walker in Los Angeles; Little Freddie King in New Orleans. And now, from Osceola, Arkansas, Son Seals.

With no hit records of their own, many of these young bluesmen are forced to copy the styles and songs of the established blues artists; their audiences demand the few blues tunes they hear on the soul radio stations, hits by B.B. and Albert King, Little Milton and Bobby Bland. For a young bluesman to perform his own songs in his own style today is a battle with the immense power of commercial radio and record promotion. Yet Son Seals has been writing his own personal blues and developing his biting, "scuffling" guitar sound for thirteen years.

Son was born into the blues. His father, Jim Seals, toured with the famed Rabbit Foot Minstrels playing guitar, piano, drums and trombone. During the 30's, he managed a blues club in West Memphis, Arkansas. Finally, in 1940, Jim Seals settled down in Osceola, a sleepy town on Highway 61 surrounded by cotton fields. There he opened the Dipsy Doodle Club, with "dancing in the front, dice in the back." His son Frank, youngest of thirteen children, was born in the family home behind the club on August 13, 1942.

With bluesmen like Sonny Boy Williamson, Robert Nighthawk and Joe Hill Louis playing in the front, Son knew the blues before he left the cradle. At thirteen he was drumnming behind Nighthawk, and soon was backing almost every bluesman who played in town. At the age of eighteen, he left his drums behind and turned all his attention to his guitar, and his local reputation spread. He formed his own band, playing four nights a week at the Chez Paris Club in Little Rock, a gig that lasted, on and off, for four years.

Visiting his sister in Chicago in 1963, Son ran into his old friend Earl Hooker, and joined Earl's Roadmasters, fronting the band and opening the show for Earl. But after six months on the road, he returned to Little Rock to rebuild his own group. Another old friend, Albert King, found him there in 1966 and hired the young guitarist to work in his band—as a drummer. Son toured California with Albert, and his drumming is heard on Albert's "Live Wire/Blues Power" album, recorded at the Fillmore West.

Jim Seals' ill health forced Son's return to Osceola, and he stayed there, playing at the Blue Goose and Harlem clubs, until his father's death in 1971. With his father gone. Son moved to Chicago's South Side to be near his sister. He soon began jamming with Hound Dog Taylor and Howling Wolf Jr. at the Psychedelic Shack on 43rd Street. When Hound Dog left the tiny Expressway Lounge after the success of his first album. Son and bassman Bob Simmons inherited the gig. They had just begun playing on Thursday nights at the Flamingo when Wesley phoned me, and I first heard Son Seals' brand of blues. It's the fiercely individual sound I heard through the phone that summer night that I've tried to preserve on this album.
by Bruce Iglaluer, Original 1973 LP Liner notes 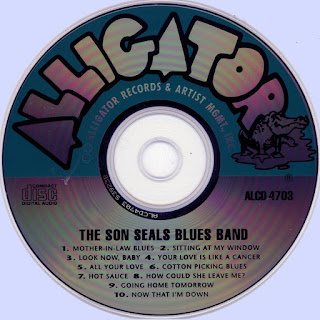