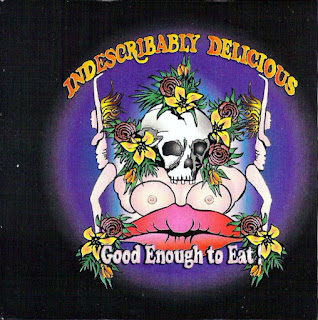 Another one of Bill Holme's All American Releases, Indescribably Delicious was formed in the Bay Area of California in the early 60's. The band became local favorites and by the mid 1960's was opening for such acts as Steppenwolf, The Turtles, The Yardbirds and many more. The band consisted of Jim Conroy on vocals, Gary Solomon on vocals and sax, Greg Munford played guitar, keyboards and sang, Art Johnson was on rhythm guitar and Mark Cohen the drummer.
The band recorded singles for the All American label and in 1969 completed their first album that was never released. The music of the band ranges from an r&b beat style similar to the Animals (with vocals remarkably sounding like Eric Burdon) to pop and even garage sounds. This album contains a dozen songs mostly written by band members except for a fantastic poppy cover of Pete Townsend's (The Who) classic, The Kids Are Alright, and two other obscure blues numbers. In the same vein as the more "popular" bands of the day such as Shadows Of Night, Every Mother's Son, The Monkees or the Outsiders, The Indescribably Delicious is one of those long lost gems that are waiting to be discovered. The only downside to this album is that it clocks in at under 30 minutes and leaves the listener wanting more.
by Keith Pettipas
The group was formed in the Bay Area in the early sixties. By the mid 1960's the group was opening for such acts as Steppenwolf, The Turtles, The Yardbirds, and several other popular acts of the day. After recording a bunch of singles for the All American label they released this first complete recording in 1969. The album cover is quite provocative and colorful, when one considers when this was released. Today people would not bat an eyelash or give it a second glance.
This is another one of those lost treasures that Akarma has uncovered and brought to the listener's attention, once again giving us a bit of history and counting in those bands that never got a fair chance. No band is insignificant enough not to be counted. Indescribably Delicious contributed a solid album's worth of material and more that is well worth giving your time and attention. The pleasure of course… will be all yours.
by Keith Hannaleck 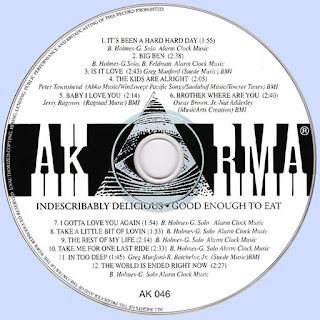