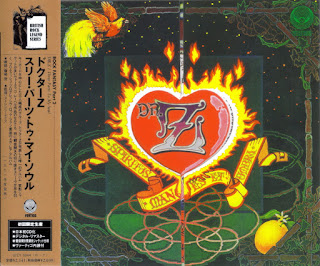 In its original vinyl form, Dr. Z's Three Parts to My Soul rates among the most valuable British prog albums of all time. But it is a rarity among such rarities in that it is also as good as a high three-figure value leaves you hoping it would be. Dr. Z was discovered by Nirvana UK frontman Patrick Campbell-Lyons, who is also credited as executive producer on the album. But Three Parts could not be further from its mentor's taste for eclectic airiness. The dominant mood is of percussive keyboards, alternately majestic and militaristic, the sound, if you like, of a Keith Emerson harpsichord concerto if Carl Palmer matched him note for note on a kettle drum. The vocals, meanwhile, have that kind of bellowed edge of conviction which makes every lyric resonate like a profoundly meaningful motto.

The first half of the near-singalong "Spiritus Manes et Umbra" moves like a battalion of tanks, with the LP's title itself rendered as compulsive a chant as any "gabba gabba hey" could be. There are moments of less-than-scintillating activity: the four-minute drum solo which punctuates that same song flags long before the chorus careens back into view, while "Summer for the Rose" is a ponderous snarling in desperate need of melody. At its most inventive and textured, however, Three Parts is an excellent example of early-'70s prog at its deepest and darkest, as inventive as it is occasionally magpie-like. "Burn in Anger," the most commercial song in sight, is a dead-ringer for a classic rock hit which will forever float just beyond your ability to name it, while the closing "In a Token of Despair" is a tour de force of Floydian winds, Crimson-ish signatures, and electifyingly symphonic structure. The Si Wan reissue concludes with two bonus tracks drawn from a similarly rare Dr. Z single released a year or so before the LP. Produced by the Pretty Things' Dick Taylor, "Lady Ladybird" and "People in the Street" have little in common with the main attraction beyond a similar taste for crashing drums and keyboards; the world's first orchestral garage band.
by Dave Thompson

Dr. Z's first and only album is the most rare record released on the Vertigo-swirl label. It sold only about 70 copies (!!) when it was released, and the rest of the pressings were trashed. 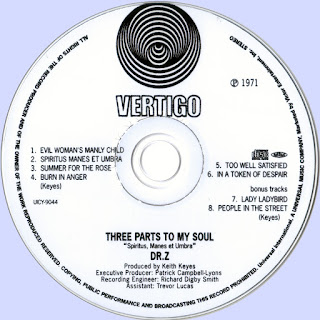