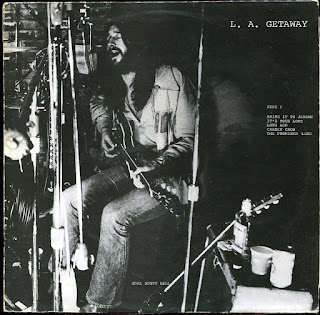 Anybody familiar with L.A. canyon-rock circa 1970 should be familiar with the name Chris Ethridge. Having more or less made his debut as the R&B-minded bass player with the Flying Burrito Brothers, the man soon went on to become one of Americana’s most in-demand session players, serving with everyone from Phil Ochs to Ry Cooder to Judy Collins. There’s a good chance that you can find him on more than one of your favorite records. A less recognized part of Ethridge’s career, however, is his time served as a member of Hill, Barbata & Ethridge, a tight congregation of musicians who had until the band’s formation only really been seen working the sidelines of the nascent country rock movement. John Barbata probably had the highest profile of any of them, having spent several years manning the kit for sardonic folk rockers The Turtles, while singer Joel Scott Hill had only cut a couple of solo sides for small independent labels out of the west coast.

So it was really only with L.A. Getaway that these three really got a chance to shine on their own. Hill, perhaps the largest unknown quantity here, turns up positively mind-blowing on cuts like “Old Man Trouble,” where he takes Otis Redding’s classic heart breaker and wrenches out one of the most satisfying blue-eyed soul performances I’ve ever heard. Ethridge, whose bass work has always lain somewhere between Stax and McCartney, finally gets a chance to work out his R&B tendencies, having heretofore been confined mostly to country and folk-rock music. I should also mention the cast of supporting players here, if only to emphasize the weight these cats held in the world of Los Angeles rock and roll. Hammering the piano and Hammond organ are none other than the holy quadrumvirate of Leon Russell, Spooner Oldham, Booker T. Jones, and Mac Rebennack. Clarence White throws down some trademark guitar solos.

If there is any part of this record which disappoints, it is in the fact that the band here relies so much on other people’s material. Though songs like Dr. John’s swampy “Craney Crow” and Allen Toussaint’s woozy closer “So Long” are given strong and inspired readings, the most memorable moments come with Ethridge’s numbers, such as the barnstorming “It’s Your Love,” which could have been a radio staple had fortune only dealt more cards in their favor. His laconic vocal drawl on the twangy title track, a wry kiss-off to the smoggy city, makes one wish he had gotten a chance to record more of his own material in this way. Otherwise, the band’s treatment of rock and roll standards like Chuck Berry’s “Promised Land” and Sonny Boy Williamson’s “Eyesight To the Blind” are fun, but not remarkable.

It’s a shame that L.A. Getaway didn’t get the chance to develop further than this one album. All three musicians would go on to other high-profile ventures, though I would argue that their sum was greater than their parts. John Barbata would serve time in many different bands through the seventies, from Jefferson Airplane to Crosby, Stills, Nash & Young, while Hill joined up with Canned Heat for a couple of years. Eventually, him and Ethridge were reunited in a latter-day incarnation of the Flying Burrito Brothers, though the recordings they made under that name, including 1975’s Flying Again, are a solid disappointment, especially in regards to Hill’s vocal performances.

L.A. Getaway did in fact see a compact disc reissue,  but also you can track down an original vinyl copy, though if the word gets around one hopes that this long-neglected classic.
by Nik Rayne 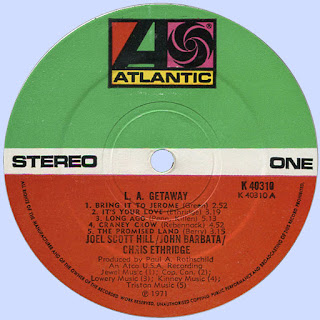