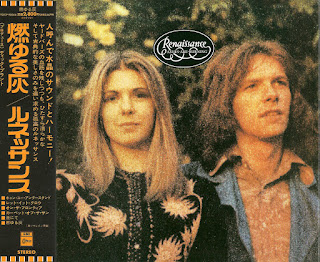 Renaissance made considerable impact and won an enthusiastic cult following when they first emerged at the beginning of the seventies. The British art rock band was born from the ashes of the original Renaissance founded by ex-Yardbirds Jim McCarty and Keith Relf in 1969. The new band continued with the concept of mixing classical music with poetry, blended with elements of rock, jazz and folk. The result was a highly individual sound blessed with hauntingly beautiful themes.

A variety of artists played with different versions of Renaissance, but the key members were guitarist and composer Michael Dunford, and singer Annie Haslam, who worked mainly with the gifted musicians John Tout (keyboards) and John Camp (bass). The lyrics to their romantic songs were contributed by the Cornish poetess Betty Thatcher, who listened to demo tapes of Dunford's songs and then posted on her lyrics. Annie Haslam, from Bolton, Lancashire, joined the band in 1972 to record their first album with the post McCarty-Relf line-up, called Prologue. Its success led to a more ambitious follow up album Ashes Are Burning.

Guitarist Rob Hendry who contributed to Prologue had left the band, and composer Michael Dunford joined the ranks as acoustic guitarist. "I went to visit the band and played them a few songs with my acoustic guitar," recalls Michael. "The acoustic sounded quite good and after a few rehearsals I became a full time member. In fact the piano was the main lead instrument which suited the orchestrated songs. There was a strong classical feel to the music. On Ashes Are Burning we worked with a string arranger called Richard Hewson who was great. The album was recorded at CTS Music Centre, which was than called De Lane Lea Studios, in Wembley.

The band line-up was John Tout, Terry Sullivan, John Camp, Annie and myself, and that was the line-up that continued until 1979. We used a 22 piece string section with woodwinds for two of the songs, "Can You Understand" and "Carpet Of The Sun". It was such an emotional feeling because we'd always wanted to work with an orchestra. Hearing the run through was absolutely fantastic, and we felt it was the way to go in the future. Over the next few years we did several "live" shows with orchestras. In the later years we changed too much, and got away from that sound, which was probably a bit of a mistake! But it was a breath of fresh air when we first recorded with the orchestra.

We didn't get any hit records off Ashes Are Burning but we gained a cult following and that album did very well in America. We were managed by Miles Copeland at the time and we went to America in 1974 for the first time. American audiences respond instantaneously and if they like you, they tell you. We were overwhelmed at the reaction to our first show, in a college in Brooklyn. We were astonished at the fact that people knew our songs. It was such a boost."

The title track "Ashes Are Burning" is an extended piece which became the band's encore number at concerts. "It gave everybody a chance to play a solo and have a bit of blow, because ninety per cent of the songs were heavily arranged. I remember one show we did at Radio City Music Hall in New York, where Betty Thatcher came out to see us play to 6000 people. We did three nights there on a huge stage, and I remember Betty introduced us. There was a cab strike in New York at that time, and we got hold of a Yellow Cab and put it on the hydraulic ramp under the stage and as the curtains opened, the cab came up with us inside it. We were greeted with rapturous applause!"

Annie Haslam remembers the Wembley recording sessions as: "A fantastic experience. We had a great engineer, Dick Plant, who really helped us a lot. The most incredible part of that album was when the orchestra came in. The first number they stuck up was "Carpet Of The Sun". I was standing next to John Tout and our eyes were welling up with tears, because all of a sudden, there was an orchestra playing our music. It felt so emotional because we had taken a step further from Prologue, and the music was progressing." The song title came from a child's inspired turn of phrase, as lyricist Betty Thatcher explains. "A child living in my home asked if the grass in the garden was a carpet, "Oh yes," I said, "It's the carpet of the sun", and I wrote the song for that child."

Renaissance rehearsed their new set of songs in a church hall before they took the plunge and started recording. Annie suggested they start the album with the sound of a gong, which can be heard on the opening track "Can You Understand". Says Haslam: "It's such a great album I love all tracks, but "At The Harbour" is one of the best things we ever did. Jim McCarty wrote "On The Frontier", which was the last time we used any of his music."

The title track "Ashes Are Burning" became one of the most important numbers in their act, and says Annie: "I have been doing it recently in my own stage shows. It's a great piece to show off the musicians in the band and I can do an operatic vocalise thing at the end. Of course since this album was made my vocal range has stretched, so I can sing higher than I did then. On the album the piece lasts about 12 minutes and Andy Powell from Wishbone Ash does a solo at the end. In the show it went on for half an hour." Betty Thatcher recalls that the song was inspired by a very strange set of circumstances. "I had a so-called "near-death experience" and I was told to go back as I didn't finished. I actually argued with God, but God won and I came back and wrote "Ashes Are Burning"."

In recent years Annie Haslam has relocated to live in America where she tours with her own band and has released a solo album Blessing In Disguise with producer Tony Visconti. Michael Dunford has also returned with a new album called The Other Woman while in Spring 1995 there were plans afoot to revive the original Renaissance with Jim McCarty, John Hawken and Louis Cennamo. The music of Renaissance seems to be spreading outwards likes ripples in a sea of talent. Says Annie: "I don't think there was anything like the music Renaissance used to produce in the seventies and eighties. We were put in the pigeon hole of classical folk rock, but there wasn't another band like us and the albums just got better and better. Looking back - I feel blessed with everything that happened."
by Chris Welch 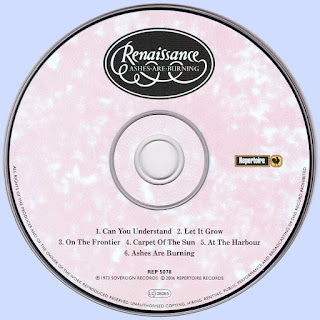