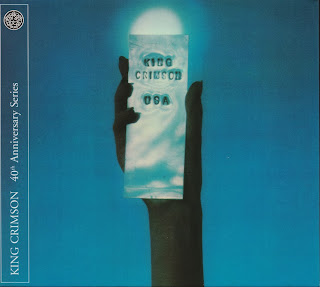 USA was originally issued in 1975 and marked the final statement by the band's incendiary mid-1970s incarnation.The CD features a completely new stereo album mix of the full concert by Robert Fripp & David Singleton.

USA was recorded towards the end of King Crimson's final US tour of the 70s in June 1974. It was issued as an epitaph for the band in Spring 1975 as a single album - at a time when doubles or even triple live albums were more considered the norm for live releases. Deleted towards the end of the vinyl era in the mid-80s, it remained unreleased in the CD era until the expanded edition was finally issued in October 2002. In common with much of Crimson's output, it was not well received at the time by critics, though its critical reputation grew immeasurably in the intervening years to the point where a review of the 21st Century Guide to King Crimson boxed set in 2004 identified the album as the point, "...where Fripp maps out the guitar blueprint for the entire post-punk movement."

If that claim sounds somewhat exaggerated, a casual listen to the opening minutes of the album where the ethereal 'walk on...' tape of Fripp & Eno's No Pussyfooting gives way to the sonic assault of Larks' II - provides ample evidence to back up the claim. It's also worth noting the audience response to the band - especially at the end of Starless, a piece that had yet to be recorded in the studio at that point.

Drawn from that release and presented in the King Crimson 40th Anniversary series format, the USA features a previously unreleased mix of the Asbury Park concert that formed the bulk of the original album, Ronan Chris Murphy's mix of the concert (issued on CD in 2006) and the expanded version of the original vinyl album as issued in 2002.
Burningshed 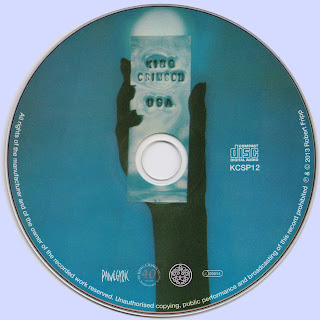