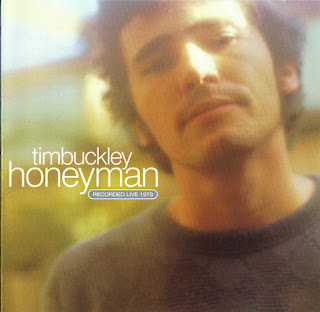 Honeyman is a previously unreleased live 1973 radio broadcast in excellent sound. As the songs originate mostly from the Sefronia and Greetings from L.A records (although a couple of songs from the '60s do appear), this couldn't be placed among his best work, or even among his best live albums (Dream Letter and Live at the Troubadour 1969 are both considerably better). Buckley's vocals are great, though, and if the tunes are sometimes too funky for their own good, this is generally good stuff, especially his riveting interpretation of Fred Neil's "Dolphins".
by Richie Unterberger

Tim Buckley was a riveting live performer. While the albums made near the end of his career are not accorded the respect of the earlier, groundbreaking releases, the songs were still up to Buckley’s high standards. Honeyman is a live album from a 1973 radio broadcast. The sound is superb and the playing is much more organic sounding and even tighter than his studio recordings. Here, the songs breathe. Fred Neil’s “Dolphins” is a credible opener, perfect for Buckley’s sympathies and its quick segue into Buckley’s own “Buzzin’ Fly” from his studio best Happy/Sad makes for a great one-two punch. The avant-garde period is passed over for a shot at Goodbye and Hello’s “Pleasant Street” and tracks from Greetings from L.A. and Sefronia. The dexterous guitar leads of “Get On Top” help cook the radio waves. “Devil Eyes” and “Stone In Love” follow with a deeper funk that leaves plenty of room for Buckley to pull off his best night moves. 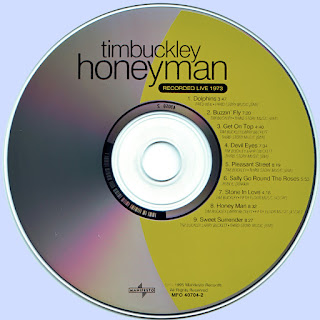