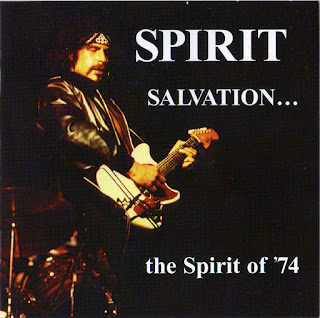 Any acquisition of live recordings from the late 'sixties and/or early 'seventies is fraught with danger as you never really know what the quality is going to be like. But as it turned out, there was no need for me to be apprehensive about this collection. The two live CD's offer excellent sound which is quite acceptable played in the car. Sometimes with these type of "newly discovered" tapes the only way you can listen is on a good domestic sound system cranked up to 11, close your eyes and pretend you were there. In fact I certainly wish I had been at Ebbetts Field Denver or the Agora Ballroom in Cleveland when these gigs happened in '74 & '75.

Spirit were down to a trio by this time but that trio did consist of three original members - Mark Andes, Ed Cassidy and of course Randy California. These three guys go back a ways and they know intuitively what each other is going to do. The playing is quite simply sublime with a plenty of invention from all three. Andes and Cassidy do a lot more than just keep the beat behind Randy's solos and special effects. The spirit of the west coast circa '67 is very much in evidence in the feel of the music, and yes they do play a lovely version of "Fresh Garbage" from that classic first album. This one clocks in at just over 4 minutes - longer than the original studio version but well short of the extended rendition on "Live from the Time Coast" - still great though. However, if its improvisation you're looking for we are treated to 9 minutes of "Like a Rolling Stone" and over 13 minutes of "All Along the Watchtower". There are also some fine Randy California originals I'd never heard before and a few covers - "Satisfaction", "Happy" and "On the Road Again" - I'd never heard them play either. The way they do the intro to Canned Heat's "On the Road Again" you'd swear they were going to break into the Norman Greenbaum number 1 hit "Spirit in the Sky". They'd probably have done a killer version of that as well come to think of it.

The third CD is all studio material and in effect fills in a gap of several years during which we had no official releases from Randy California prior to "Spirit of '76". We are treated to all of 25 tracks on this CD and most of them are simply beautiful regardless of whether they're uptempo or more laid back. Randy California was going through a distinctly spiritual phase and that is reflected in the music and lyrics. Several tracks are predominately acoustic but there is tasteful and creative use of special effects and a couple of whimsical dialogues featuring a conversation with a "visitor" from the planet Neptune, and an interview with a bogus Indian guru which segues into one of the best cuts on the CD entitled "Holy Man".

Some Spirit purists may argue that Randy's vocals aren't up to Jay Ferguson's standard, or that they miss John Locke's keyboards. That may be true, but their absence certainly does allow for more of California's wondrous guitar work (both electric and acoustic) so that's okay by me. In fact if you play this and then slip on an album by Jo Jo Gunne it will be all too clear why Ferguson and California were no longer interested in working together on a permanent basis. To be honest I'd happily take the Spirit trio's amazing reworking of Dylan's "Positively 4th Street" in exchange for Jay Ferguson's entire post Spirit output - but that's just me.

If I have a criticism it might be that there are two or three acoustic numbers after track 21 which sound a bit muddy and distinctly unfinished, and that's why I'm knocking off a star. A couple of those could perhaps have been omitted but I guess Randy California completists wouldn't want to be deprived of even these slightly substandard offerings.

Anyone who ever enjoyed anything by Spirit in any of their incarnations will love this 3CD set, and it's very reasonably priced right now so a good opportunity to grab a bargain. Also any younger students of psychedelic guitar who don't know about one of the genre's unsung heroes really need to hear Randy California in his prime. When the music magazines compile those lists of "top 50 guitarists of all time" he rarely figures, yet he should be permanently in the top 3 at the very least.
by Michael Pearson-Smith Melbourne,Australia

As of 2007, ten years had passed since the accidental death of singer/songwriter and guitarist Randy California, the primary musician in Spirit. California left behind an extensive, if disorganized, cache of unreleased live and studio recordings that producer Mick Skidmore has been working through ever since, emerging periodically with albums of previously unheard material. Salvation...The Spirit of '74 is a three-CD set that, as Skidmore notes in his annotations, helps to fill in a gap in the band's history. The original quintet of California, drummer Ed Cassidy, bassist Mark Andes, keyboardist John Locke, and singer/songwriter Jay Ferguson splintered in the early '70s, after which various configurations, including one that featured none of them, toured the country.

California, who had left the group for a solo career, rejoined Cassidy for a European tour in 1973, then left again. In 1974, the two reconnected and again performed as Spirit, sometimes adding Andes and occasionally Locke. In May 1975, a trio of California, Cassidy, and bassist Barry Keene finally released a new Spirit album, Spirit of '76. Salvation...The Spirit of '74 chronicles the band's live and studio work during a period of about a year, from the summer of 1974 to the summer of 1975, including preliminary work on a never-completed album intended to be called Spirit of Salvation.

On the first two discs, drawn from live performances given in October and November 1974 (with Andes) and in June 1975 (with Keene), Spirit play some of their familiar songs ("Fresh Garbage," "Mr. Skin," "It's All the Same," "I Got a Line on You") along with covers that emphasize California's debt to his mentor, Jimi Hendrix ("Like a Rolling Stone," "All Along the Watchtower," "Hey Joe"); some songs California probably picked up while hanging around the Ash Grove folk club in Los Angeles as a child ("Old Blue," "Run Sinner Run," "Cripple Creek"); some one-off oddities (seemingly impromptu readings of the Rolling Stones hits "[I Can't Get No] Satisfaction" and "Happy," a version of Canned Heat's "On the Road Again" that apparently was a nod to Andes' brief tenure in that group); and some of the new songs California was writing at the time. More of those new songs, along with novelties and more covers, are included on the third disc, which consists of studio recordings.

That all adds up to 56 tracks running more than three and a half hours. It doesn't entirely fill in the gap between the releases of California's solo album Kapt. Kopter & the (Fabulous) Twirly Birds in the fall of 1972 and Spirit of '76 two and a half years later, but California spent much of that period musically inactive or working on the subsequently released Potatoland album, and his return to Spirit, the band he would lead for much of the next two decades, is now well documented here. As Skidmore notes, this is an album for loyal, even die-hard Spirit fans, but it contains enough strong performances to make the case for California and his bandmates as what an MC calls them at the outset: "one the greatest names in the history of rock & roll."
by William Ruhlmann 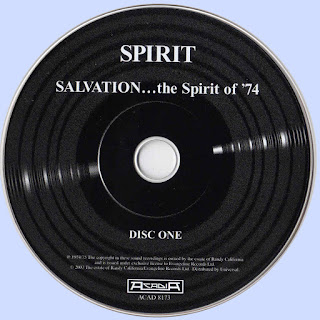 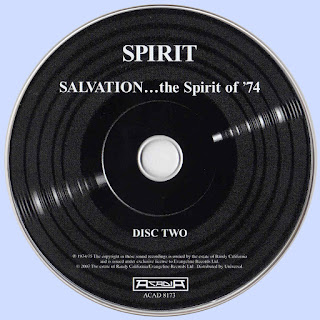 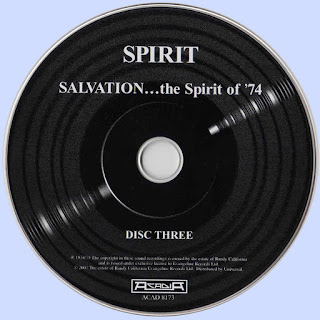