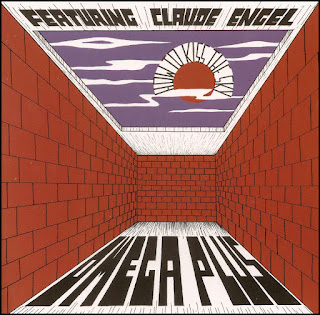 "How to kiss the Sky" is the first trace of Claude Egel on record before he became a member of Magma. Omega Plus is the group formed by Claude Engel who is not content just to play - and very well too - guitar or flute but also gives a very good show as a vocalist. Released in '69, Omega Plus's album was influenced by Cream but its music also contains a foretaste of Magma on the B side which features a long piece full of electric energy, folly and a frenzied rhythmic beat. Claude Engel gives a fabulous display of his talent as a guitarist on this track.
by Francis Grosse, Bernard Gueffier
This trio led by Claude Engel made a legendary album . Just 1,000 copies were pressed in 1969. Side one had 5 short songs with English lyrics, ranging from heavy progressive blues-rock to largely acoustic songs (comparable to Cream and Blind Faith). Claude Engel's voice is also quite similar to Jack Bruce's. The other side had a long live track named "Voyelles", based on a poem by Arthur Rimbaud, including a recitation. This is the primal scream of "zeuhl" rock, in a very raw and rudimentary form that quite a few will interpret as vaguely planned three man jamming. Overall the album is undoubtedly historical, but not entirely satisfying for all that.
by Dag Asbjornsen