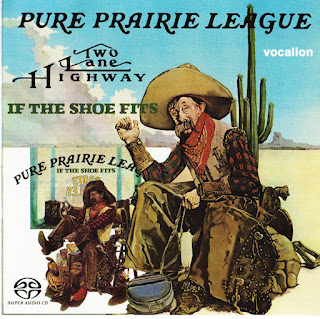 By 1975 Craig Fuller, who had written all but two songs for the "Bustin" Out album, had moved on to join American Flyer, so George Powell pulled in Hinds and Call from the first two albums, added Michael Connor (keyboards), Larry Goshorn (lead guitar) and Mike Reilly (bass) for 1975’s “Two Lane Highway”. Larry Goshorn (ex-Sacred Mushroom) has replaced Fuller as the main songwriter in the band. Nice moments including the title track, "Runner," and a humorous tribute to country music legend Merle Haggard. They recorded in Hollywood and Nashville and utilized such guests as Chet Atkins, Johnny Gimble, Don Felder and Emmylou Harris. Alongside group originals they featured Gene Clark’s Kansas City Southern, Tom McGrail’s  Pickin’ To Beat The Devil and the humorous I’ll Change Your Flat Tire, Merle.
“If The Shoe Fits” features the same PPL line-up, though this time the band members co-wrote much of the material with each other, giving the whole album a more cohesive vibe.  However, that’s not apparent from the opening revival of the Crickets’ That’ll Be The Day, which sounds at odds with the rest of the album—despite it being a rather good rendition. That is the only outside song, though Sun Shone Brightly was penned by Tim Goshorn, younger brother of Larry, who was to join the band a year after the album was recorded. 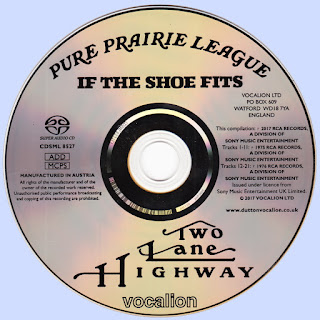