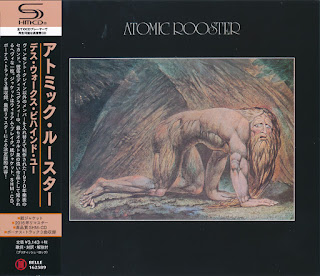 In the progressive rock community there is some controversy regarding the status of Atomic Rooster as a full-fledged prog band.  Like many Seventies acts often placed under the ‘heavy prog’ umbrella (Captain Beyond and High Tide to name but two), in the eyes of purists they are little more than glorified hard rock combos with some hints of something more complex, yet more akin to Deep Purple and Black Sabbath than Genesis or Yes. In recent times I have happened to see Atomic Rooster labeled as a ‘dark’ band – a definition that made me think of the likes of The Cure or Siouxsie and the Banshees rather than any of the classic bands of the Seventies.

On the other hand, as both the brilliant title and the iconic cover (depicting William Blake’s “Nebuchadnezzar” on a simple black background) suggest, Death Walks Behind You is a very dark album – a haunting, Hammond-drenched effort which sounds like a encounter between Black Sabbath and Deep Purple with ELP writing the soundtrack. In many ways, it can be seen as the blueprint for the heavier side of prog, a lavish feast for any self-respecting fan of the mighty Hammond organ, and a welcome respite from the pastoral soundscapes of  Camel or Genesis, or the mind-boggling intricacy of Yes. Definitely hard-edged, occasionally oppressive, undeniably raw and unpolished, it possesses the kind of power that many more recent albums strive in vain to achieve.

This is one of the rare albums that captured my attention right from the first listen. True, Death Walks Behind You is not perfect, but then very few albums are, even those normally hailed as masterpieces. Vincent Crane’s highly effective, aggressive playing style, perfectly complemented by the expressive voice and blistering guitar lines of John DuCann (formerly with proto-prog outfit Andromeda), is a real treat for the ears of every Hammond lover. The third band member, drummer Paul Hammond (who replaced co-founder Carl Palmer when the latter joined ELP), lays down a powerful backbeat, assisted by Crane’s skillful use of both keyboard and foot pedals to replace the missing bass lines. This idiosyncratic take on the classic power trio unleashes a massive volume of music that, while not as technically impeccable as what ELP or Deep Purple were producing at the time, is brimming with sheer intensity.

A couple of tracks relieve the tension and overall dark mood of the album – namely the catchy, almost upbeat “Tomorrow Night” (originally released as a single), and the heavy rock-goes-commercial “I Can’t Take No More”. Neither are personal favourites: in my view, especially the latter could be scrapped from the album without doing a whole lot of damage. On the other hand, the slow, melancholy number “Nobody Else”, dominated by Crane’s piano, sees a remarkably emotional vocal performance by DuCann, providing a perfect foil for Crane’s despondent, foreboding lyrics (he suffered from mental problems and ended up committing suicide, as did Hammond).

The real highlights of the album, however, are to be found elsewhere. The title-track is introduced by dissonant, menacing piano, then explodes into a memorably hypnotic organ riff punctuated by the obsessive repetition of the title, “Death Walks Behind You”.  “7 Streets” is a more structured composition, based on the interplay between organ and guitar, while “Sleeping for Years” is in a similar vein, though with a slightly darker tone – both excellent examples of vintage heavy prog, somewhat influenced by Black Sabbath, but with better vocals and lashings of keyboards replacing Tony Iommi’s monstrous riffing. The two instrumentals, “VUG” and “Gershatzer”, are probably the most progressive offerings on the album, showcasing Crane’s skills as a Hammond player; the latter, which is almost 8 minutes long, has the slightly loose feel of a jam session, intensified by the presence of a short drum solo.

Though not exactly flawless, Death Walks Behind You is an impressive offering  that is  almost a must-listen for Hammond fans and anyone who likes their prog with a harder edge (though not necessarily metal). A fascinating, almost addictive album by an underrated band, whose long but chequered career ended tragically with Vincent Crane’s death in 1989.
by Raffaella Berry 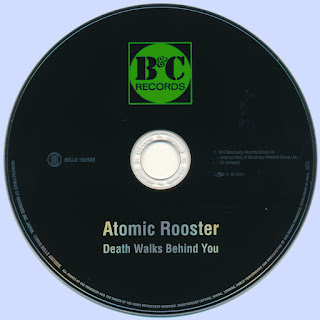