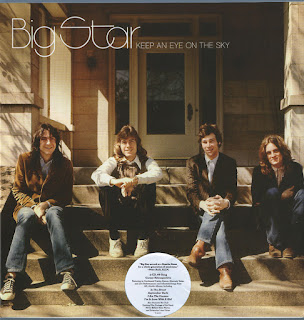 In the wonderful booklet that comes with Keep An Eye On The Sky, the most comprehensive compilation of the semiminal (though often overlooked) Big Star, there’s an in-depth article where Bob Mehr gathers comments from fans, friends and famous supporters of the group.

Among them there’s Peter Holsapple, dB's former composer and guitarist, who credits much of his success to Big Star: “I used to test my potential girlfriends with Radio City,” says Holsapple. He adds he was once told by one of this “candidates” that Big Star were like “America with too much high frequencies”: the girl responsible for this profanation was immediately “dismissed”, because cults – whether big or small – must always be guarded, cherished and respected.

Cults promote the sense of being part of something and help fight loneliness. And Big Star are the quintessential cult-band. Although Big Star only released two albums during their brief existence, they are now considered milestones and reference points for thousands of artists. The albums have fallen in and out of print over the years, including a third album (Third/Sister Lovers) released some eleven years after the group broke up.

Formed in Memphis, Tennessee by two songwriters, Alex Chilton and Chris Bell. Chilton had already enjoyed success with The Box Tops, singing the 1967 #1 hit, The Letter at the tender age of 16. Chris Bell was an anglophile who had fallen in love with the Fab Four and was scraping a living as technician in the Ardent Studios. They met by chance, when Chilton wanted to record something new while Bell introduced him to Andy Hummel (bass) and Jody Stephens (drums). Together they spent many nights playing the songs of The Yardbirds and The Who.

According to Peter Buck (R.E.M.), in the mid-1970s the only ones who knew Big Star were music critics and record store employees. “No one I knew had ever seen them play. I think I’d read that one of the guys had been in the Box Tops — which made no sense either. Information was scarce. So these records they’d put out, they were simply artifacts. It was like seeing the heads of Easter Island or the Great Pyramids or something. You didn’t know what they were or how they’d gotten there. The band was a mystery. Nowadays you get a computer and look for them in Google, but back then there were just the albums. Nobody I knew had ever seen them playing live. It was probably the first group to embody the idea of beautiful loser. Before them, the Velvet Underground had issued four albums and toured everywhere in the States. You could find Stooges’ albums in stores: they were not popular, but they were available. Big Star forced you to wonder whether their career was actually real. It looked like one of those weird American mythologies: these guys had done some excellent works, they were ignored and so they disappeared”.

Keep An Eye On The Sky is the parameter required for anybody - believers or not - to enter the Big Star church and become its ministers. It’s a cult object itself, a ray of light in the darkness so that nobody can ever say “I wasn’t there” or “I didn’t know” about an adventure that has been canonized by time and by Eliott Smith, Wilco, The Walkabouts, Nada Surf, Teenage Fanclub, The Replacements, Primal Scream, and Whiskeytown , just to name a few artists who have performed the songs of Big Star.

In other words, Keep An Eye On The Sky is based on the “cult status” of Big Star and not on their “career”, because the latter day offshoots spanning from the live “reunion” album, Columbia: Live at Missouri University (1993) to the last studio album, In Space (2005) released are wisely ignored: first of all because they are not very good, but secondly, and more importantly, because the crystal-clear eloquence of myths don’t allow for appendices.

With Big Star a new language was born where the Mercybeat of The Beatles and Kinks merged with Southern soul, romantic teenage fantasies, and coming of age tales. Sometimes we wonder: are we talking about the same authors when listening to the childlike images of Thirteen (“Won’t you let me walk you home from school / won’t you let me meet you at the pool / Maybe Friday I can / get tickets for the dance / and I’ll take you”) and Back Of A Car (“Sitting in the back of a car / Music so loud can’t tell a thing / Thinkin’ ‘bout what to say / And I can’t find the lines”) and then to the sorrowful gloomy Holocaust (“You’re mother’s dead / You’re on your own / She’s in her bed / Everybody goes / As far as they can / They don’t just care / You’re a wasted face / You’re a sad-eyed lie / You’re a holocaust”)?

In 1972 Ardent has just signed a distribution contract with Stax to promote works recorded in its studios. The label founder and studio owner, John Fry – the genius sound engineer –offered an unlimited amount of recording hours. Big Star were given freedom to play and experiment in the studio supervised by Terry Manning, Jim Dickinson and Fry himself. #1 Record really invents “power-pop” by mixing Beatles-like melodies and soft harmony-vocals with killing riffs, rootsy rough tunings, hyperbolic drumming and nervous bursts of organ and winds.

Bell is responsible for the softer, poppier, side of the group, whereas Chilton provides rock’n’roll urgency. Even though the songs are mostly co-written, #1 Record belongs mainly to Bell, who’s able to inflate his pop gems with the obscure depth the emotional distress of Soul, while Chilton sharpens his rock’n’roll edges and brings an r&b groove to the songs.

Accustomed to the public’s sudden changes in taste, Chilton bore the commercial flop without striking a blow, but Bell went off the rails with his drug addiction, spending most of 1973 in a rehab centre. Briefly Bell relocated to Europe, but he eventually returned to Tennessee to manage the family-run fast food chain until 1978 when he tragically died in a car accident. Over a decade after his passing, the superb I Am The Cosmos (his lone solo release) was released, and is worth the best pages of Big Star’s songbook (the box contains some of the solo demos).

Tragedy is part of the show and, with a Shakespearian solemnity, after two albums - #1 Record (1972) and Radio City (1974) – full of promises, unforgettable melodies and youthful exuberance Big Star fell apart in the grand collapse of Third/Sister Lovers. Alex Chilton and Jody Stevens entered the Ardent studio once again, but this time without Chris Bell or Andy Hummel. Using an array of local Memphis musicians, Chilton attempted a third Big Star album.

The lyrics of Nightime (“Get me out of here / I hate it here”) sound like an epitaph in the too short career of such a great band. The new recordings, full of feedback lashes, dark-folk and classic strings, don’t even have a name: the tiny label PVC provides it – with just a little imagination - and in 1985 issues what they considers the definitive tracks under the title Third/Sister Lovers, while Jody Stephens becomes the new manager of Ardent.

What comes next is recent history and it’s not very interesting. What’s really interesting, though, is the fact that Keep An Eye On The Sky outlines the box-set state of the art: it contains nearly all of Big Star’s studio output, featuring original tracks, alternative versions, demos, covers and unreleased tracks (spanning a period from 1968 to 1975) along with a kick-ass live album recorded when Big Star opened for Archie Bell & The Drells at the Lafayette's Music Room in Memphis. Fifty-two songs (out of ninty-eight) have never been issued before. Well done.

Keep An Eye On The Sky is like a mirror game where it’s exciting to get lost. The folkie confession of The India Song (here sung by Hummel alone) merges the Led Zeppelin[esque heavy rock of Feel and Don't Lie To Me with the anthemic roots of The Ballad Of El Goodo, the country-based soul of Country Morn and Watch The Sunrise with the acoustic interpretation of Loudon Wainwright’s Motel Blues.

Radio City’s garage-oriented pop-rock stands out in the second album, along with the only full-length record ever released by Chris Bell (starring the epic, dynamic pop of I Am The Cosmos and You And Your Sister), some lo-fi demos that became part of Third/Sister Lovers, and a multilingual version of the Velvet’s Femme Fatale. It’s a triumph of ballads and pop-rock that foreshadows the whole artistic career of Posies, Raspberries, Fountains Of Wayne or Gin Blossoms, who are all included in the crazy r’n’r of I Got Kinda Lost and Back Of A Car, in Way Out West’s (new) latin percussions, in O My Soul’s (new) Booker T.-styled keyboards and in the immortal ramshackle hymn of September Gurls.

The third CD lines up the existential (and musical) disorientation of Third/Sister Lovers (the album that modern rock critics praise the most). There are fewer unreleased tracks but the unplugged versions of Jesus Christ, Downs, Holocaust and Lovely Day along with the amazing Till The End Of The Day (Kinks) and the standard Nature Boy (with the photographer William Eggleston on piano) are enough to spice it up.

No words could express the overwhelming live album found at the end of the box. The concert highlights the explosive heap of energetic, powerful, rowdy and restless roots-rock of She's A Mover, the bluesy Try Again, the disorienting guitar and drums solos of ST 100/6 and the unpredictable covers including Hot Burrito #2 by Flying Burrito Brothers, Baby Strange by T. Rex, and the pop-prog classic, Slut by Rundgren.

We know that each monotheist religion is in danger because of its own dogmatisms, but the consubstantiation taking place in Keep An Eye On The Sky is something close to a miracle. It shows all the enthusiasm of a band ready to conquer the world, all the influences coming from a whole youth spent listening to every record they could come across, all the shadows of the overhanging disaster and all the darkness deriving from human and creative failures that will mark all the coming years.

The glue is, as always, rock’n’roll and Keep An Eye On The Sky is the closest thing I could imagine to a monument to all its beauty, all its dreams and all its poetry.
by Gianfranco Callieri 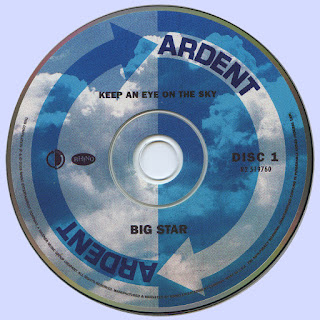 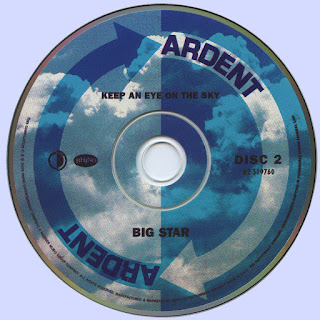 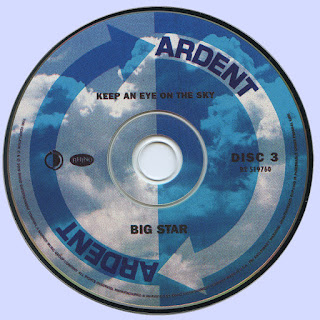 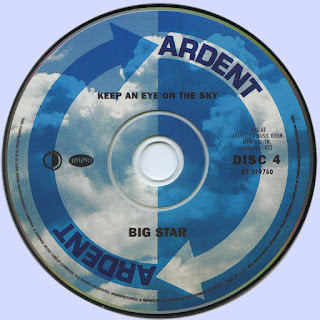