Tales of Justine only had one single, 1967's "Albert (A Pet Sunflower)"/"Monday Morning," both sides of which are included on this release. But with the addition of 13 tracks recorded between August 1967 and January 1969 that were unreleased at the time, there's enough for a full album with this LP, pressed in a limited edition of 1000 copies. Entirely written by David Daltrey (except one song he co-wrote with Paul Myerson), it's very much in the school of flowery British pop that, ahem, flowered in the period just post-Sgt. Pepper's

Even by the gaudy standards of the style, it's inclined toward storybookish lyrics and precious melodies, quite possibly taken to excess on "Obsolete Incident," which manages to fit in references to whitewashed coal, chocolate flowers, a clock that runs backwards, and sunburned toast just in the first 40 seconds. Orchestration gets loaded into the mix on the five tracks recorded in December 1968, perhaps looking forward to the kind of musicals on which producer Tim Rice and arranger Andrew Lloyd Webber would collaborate in the near future. If you're the kind of listener who just loves, say, the Hollies in their most psychedelic period around the time of Butterfly, you may well find this to your liking, though it's on the candy-coated side even in comparison with the Hollies' sweetest pop-psychedelia. A harder side surfaces on "Evil Woman," with its pungent psychedelic organ. basic mod rock, and freak-out instrumental break, but that's an atypical effort in the context of this collection.

Though Tales of Justine were yet more precious in their approach. Bandmember and singer/songwriter David Daltrey was featured in the early Rice-Webber musical Joseph and the Amazing Technicolor Dreamcoat, and later formed the group Carillion, a support act in a tour during David Bowie's Ziggy Stardust phase. The group's single, and numerous unreleased tracks from 1967-1969, were compiled on the 1,000-copy limited-edition Tenth Planet LP Petals from a Sunflower in 1997.
by Richie Unterberger 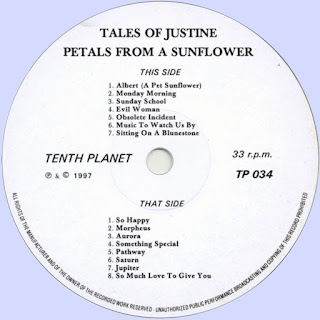