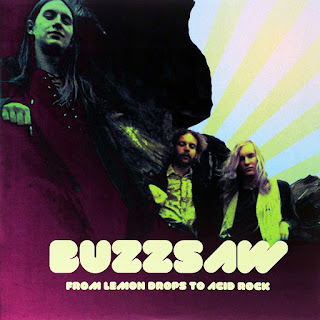 The Lemon Drops were one of those 60’s pop bands that disappeared from the musical map, with nearly everyone thinking that like so many, they’d gone up in flames … when nothing could have been further from the truth. With a bit of help from the lysergic, a new vision, and a revamping of the band, the core of The Lemon Drops relocated to the west coast and re-surfaced as The Buzzsaw; a power trio featuring ex-Lemon Drops Eddie Weiss [guitar], Gray Weiss [drums], along with Rick Fertel [bass].
The lush atmospheric pop effects of The Lemon Drop were also reformatted, pushing peddle effects to the max, filled with distortion and fuzz to create a sonically more heavy sound, often coming across as Love, and at other times with flashes of The Velvet Underground [especially the Velvet’s song “What Goes On”], along with Jimi Hendrix, though with that being said, their sound was delightfully in and of its time, and not really as heavy as the word heavy may suggest. Hitting the recording studio in 1971, backed by CCR’s manager Max Weiss, the band released but a single 45 rpm that went up in smoke, with nearly no one ever hearing it, as it both flashed back to a Lemon Drops ear song on side A, and with side B containing a track that didn’t really suggest where the band was at at this stage of their career.
It wasn’t until 1995 that all of the recordings done at both Ampex Studios in San Francisco, and those laid down at Pacific Sound Studios, were finally gathered together, unleashing a sort of proto grunge psychedelic sound, filled with melodic vocals over which a sustained wah-wah laced the tracks together, though merely whispering as to where this band might have found themselves, had they had the proper management and production team backing them.
Once you sit down with this grouping of songs, you’ll be surprised at how fresh and up to date they sound, featuring a lo-fi atmosphere that with a bit of reworking, could easily be delivered today without a second thought, and almost no one knowing the true genesis and magic of these tracks.
*** The essential keepers are: “Saturn Is Just A Few Days Away”, “Don’t Listen To Sam”, “U.S. Chick”, “Roll Your Green Grass On”, “In The Country”, “I’ll Be Wanting You”, “Gotta Be Rock n’ Roll”, and “Walkin’ Thru A Rainbow” … most of the other tracks sounded unfinished or in the process to me, with the alternative takes and versions being pretty useless.
by Jenell Kesler 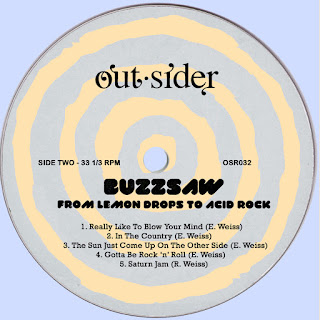