Grace Slick And The Great Society - Conspicuous Only By Its Absence / How It Was (1968/71 us, west coast psychedelic rock, historical live recordings at Frisco's matrix club 1966, Collector's Item issue) 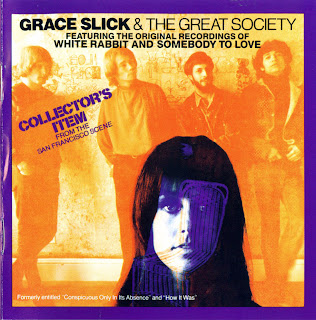 This double-LP/single-CD reissue combines both of the Great Society's live albums, Conspicuous Only by Its Absence and How It Was, and features "Somebody to Love" in its original slower, more menacing version. It also includes the Society's extended version of Grace Slick's "White Rabbit" along with several other haunting originals which strike an exhilarating balance between tight songwriting and psychedelic jamming. Based on his raga-tinged work here, guitarist Darby Slick (Grace's then brother-in-law) deserves a lot more recognition than he's ever received for his pioneering explorations of Eastern scales.

Bassist Peter Van Gelder isn't far behind him in the innovation department, and makes significant contributions here on saxophone and flute as well, plunging into John Coltrane territory on the former -- and his work on "White Rabbit," by itself, is worth the price of admission. Additionally, Grace Slick's singing was already about 95-percent of what it would be with the Airplane when she came aboard the latter, and if you close your eyes and forget what you're hearing, there are moments when you'd swear you were listening to her work from Surrealistic Pillow, After Bathing at Baxter's, or Crown of Creation.

What's more, the CD edition is very nicely produced, the engineers overcoming most of the sonic limitations of the original concert tapes that made the original LP versions sound so flat in spots. All of these attributes make the title of this release something of a misnomer -- far more than a "Collector's Item," this is a genuinely exciting glimpse into the birth of psychedelic music, and essential listening for any devotees of the latter, or the San Francisco sound in any of its manifestations; the Great Society might not have made it past 1966, but they left behind music here that was as solid, substantial, and enduring -- and worth hearing today -- as anything the Airplane, the Grateful Dead, and the Charlatans were doing at the time. (And if you do look for this CD -- which, amazingly, is still in print as of 2007 -- a lot of stores tend to file it under Grace Slick rather than Great Society).
by Richie Unterberger and Bruce Eder 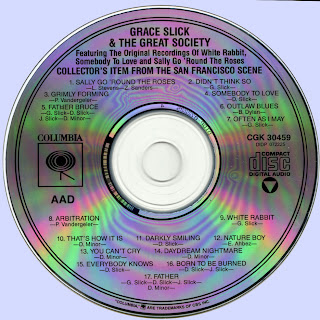 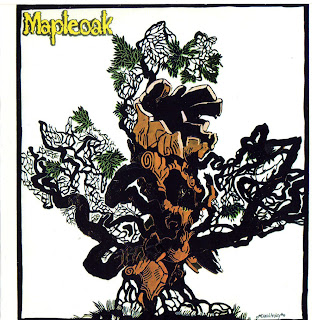 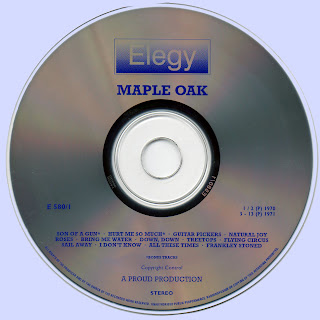