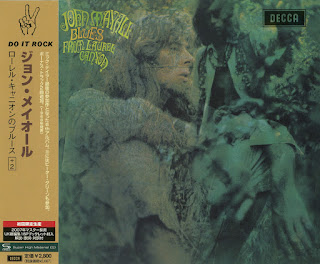 John Mayall is of course the Godfather Of British Blues, first recording in 1965 and still touring and recording prolifically today, well into his seventies. My favourite of his many albums is this offering from 1968, which is both a collection of original blues-based songs with contemporary psych overtones and also a diary in music of his three-week vacation in Los Angeles that summer: either a song cycle or a concept album, according to your own definitions, but certainly unique among the slew of straightforward blues albums being produced by white performers on both sides of the Atlantic at the time.

Starting with the roar of a jet swinging across the stereo plane – a device cheekily lifted from the Beatles’ White Album – the record chronicles Mayall’s discovery of the heady delights of late sixties LA, his first sojourn in Laurel Canyon where he would later make his permanent home, his stay as a guest of Canned Heat with whom Mayall struck up a strong and lasting rapport – later, both Harvey Mandel and Larry Taylor would leave Heat to join Mayall’s band – and, in considerable detail, his mission to get laid. It ends with a rueful recollection of the brief love affair and a moody anticipation of returning home to the UK.

In fact this is a collection of many moods, from joyous exploration of glamourous new surroundings, to irritable self-examination following a bust-up with an unidentified companion, to deep and intimate relations in the bedroom. The changes of mood are emphasised by Mayall’s constant switches of instrumentation – he was already virtuosic on piano, Hammond, and mouth-harp and capable on guitar – and by the careful segue of each track into the next, plus the pitching of each song in a different key. Every one of the twelve keys of the chromatic scale, except F#, is used (try playing blues in Db or Ab, if you will).

Backup is provided by the rock-solid rhythm section of drummer Colin Allen and 18-year-old bassist Stephen Thompson, while guitarist Mick Taylor, on his final studio outing with Mayall prior to joining the Stones, wields his Les Paul always tastefully and often excitingly throughout. Production by Decca’s veteran producer Mike Vernon is commendable for those eight-track days.

My standout tracks are Ready To Ride, on which Mayall’s overactive hormones fuel some explosive harp work, The Bear, whose intro pays tribute to a well-known Heat riff before segueing into a delightful piano-led country blues dedicated to Bob Hite, and Miss James, in which the Hammond reels through jazzy changes in their best Jimmy Smith style. But individual tracks cannot do justice to this album; for best effect it demands to be heard in sequence at a single sitting.
by Len Liechti, August 6th, 2009 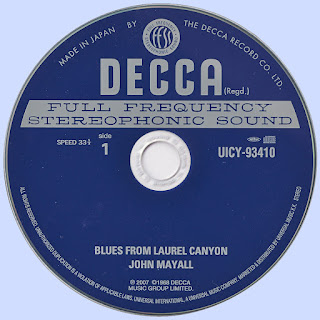