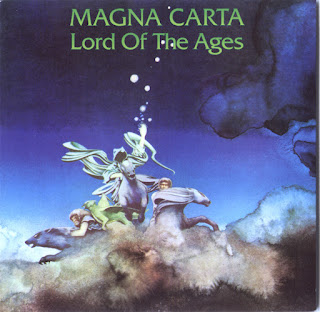 In 1973, English progressive folk group, Magna Carta, released their fourth album, Lord of the Ages. Joining members Chris Simpson and Glen Stuart, was Stan Gordon, who had replaced Lyell Tranter. Together, the trio released this appreciable album, which is arguably best listened to in a peaceful environment, to match the tranquil vibes of the music.

Starting off with, Wish It Was, Magna Carta announce to the world that they are still capable of creating beautiful works of musical delight. It is about the singer’s attempt to visualize events in his mind where he is helping others to fulfil lost dreams.

It clearly works, the song opens the album in a remarkable way, you would have to be a sociopath not to have a smile on your face while listening to it. That stinging acoustic guitar sound could even spike the interest of the toughest hard rockers. The second song, Two Old Friends, moves a bit more into the country territory, while still retaining the ‘folkiness’ that Magna Carta are known for. Lead singer Chris Simpson has a voice somewhat similar to Marty Balin of Jefferson Airplane. The song drags a bit, but it does have a killer harmonica sound throughout. Not as good as the opener, Two Old Friends, is an acceptable piece regardless.

Now we get to the title track, at over ten minutes long, it starts off with a spoken word passage that proves they had a skill for poetry, as well as enchanting melodies. The song transforms into an exciting whirlwind of sounds that come out of nowhere. You will be reciting the chant “gathering in the harvest” in your head for hours after hearing it. The imagery here is flooded with folk-horror images of forests, fields of wheat, and children playing. It then begins to mellow, before slowly fading out. Come to think of it, that bombastic part of the song is probably the only part of the album that would be suitable for radio consumption.

Now, we get to the ever-beautiful, Isn’t It Funny (And Not A Little Bit Strange) – not unlike singer-songwriter Harry Nilsson’s Waiting On The Willow from his Aerial Ballet album. The song has a dream-like aura to it, similar to floating away to far away lands of mystique that could only be conceived by the ideas we get while in dream land. It has a slight pop element to it, and a leisurely breeziness, but don’t fall asleep, we still have half of the album left!

After finishing that (which might be the best song on the whole album), we get to Song of the Evening. While not a total bore, in a way similar to Two Old Friends, it kind of just ‘drags on’, where as the other slower numbers on the album manage to grab your attention, this lacks that resonance. It just drones, with no apparent enthusiasm in sight. The swirling guitar part that is prominently featured throughout the song is impressive. The album then goes into the second-longest track on the album, Father John, it is a bit better than the previous track, although it is still inferior to anything on the first half of the album. It does have impressive harmonies, which frankly isn’t surprising for Magna Carta. The song features fitting bongos, which go perfect with a song like this. Not great, but a passable song nonetheless.

Not to worry, That Was Yesterday is a fetching ballad that will grab your heart and won’t let go until the song draws it’s very last breath. Dominated by the piano, this song is the definition of the word beauty. The lead vocals never sounded better on this album, it has a very romantic feeling to it. Accompanied by woodwind and string instruments, it is as emotionally powerful as it is gentle. Finally, we come across the album closer, Falkland Grene, an interesting medieval-style track, this one definitely seems like it could be popular while played deep in a forest, near a campfire. Enjoyable for sure, it contains lots of vivid imagery just like most of the rest of the album.

Even though there are arguably a couple of blunders on the album, the record is a joyous experience overall. Magna Carta would go on to release many more albums, including The Fields of Eden in 2015.
by Matt Kessler, June 22, 2017 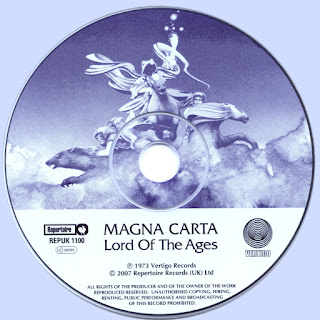 Free Text
Text Host
Posted by Marios at 9:04 AM 3 comments: