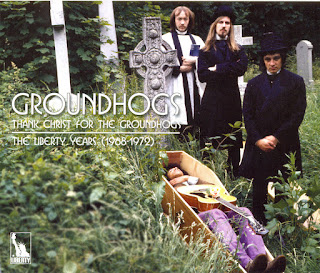 The Groundhogs' debut album is a long way from the "classic" sound of the better-known Thank Christ for the Bomb/Split/Who Will Save the World? trilogy. Indeed, the mellow classic blues through which the band pursues its nine tracks offer the unsuspecting listener little more than a direct blast from the peak of the British blues boom past. Early Fleetwood Mac, Chicken Shack, and Savoy Brown all haunted precisely the same corridors as Scratching the Surface, with only the occasional burst of fuzzed Tony McPhee guitar to distinguish the sonics from the rest of the pack. That said, Scratching the Surface ranks among the finest albums to emerge out of that entire period, a moody shuffle that includes an epic recounting of the Chicago classic "Still a Fool" and which matches five solid McPhee originals with a pair of blistering contributions from outgoing harmonica whiz Steve Rye. In fact, his "Early in the Morning" and "You Don't Love Me" might well be the album's best numbers, a discrepancy that puts one in mind of another of the blues boom's hottest acts, Jethro Tull, and just how much they changed once a founding member (Mick Abrahams) departed. Again, if you arrive at Scratching the Surface in search of a fresh "Cherry Red" or "Status People," you'll probably be disappointed. But if you want to hear the blues sluicing straight out of the Southern England Delta, there are precious few better introductions.

Thank Christ for the Bomb was the first Groundhogs album to indicate that the group had a lifespan longer than the already-fading British blues boom suggested. It was also the first in the sequence of semi-conceptual masterpieces that the group cut following their decision to abandon the mellow blues of their earlier works and pursue the socially aware, prog-inflected bent that culminated with 1972's seminal Who Will Save the World? album. They were rewarded with their first ever Top Ten hit and purchasers were rewarded with an album that still packs a visceral punch in and around Tony McPhee's dark, doom-laden lyrics. With the exception of the truly magisterial title track, the nine tracks err on the side of brevity. Only one song, the semi-acoustic "Garden," strays over the five-minute mark, while four more barely touch three-and-one-half minutes. Yet the overall sense of the album is almost bulldozing, and it is surely no coincidence that, engineering alongside McPhee's self-production,

Martin Birch came to the Groundhogs fresh from Deep Purple in Rock and wore that experience firmly on his sleeve. Volume and dynamics aside, there are few points of comparison between the two albums -- if the Groundhogs have any direct kin, it would have to be either the similarly three-piece Budgie or a better-organized Edgar Broughton Band. But, just as Deep Purple was advancing the cause of heavy rock by proving that you didn't need to be heavy all the time, so Thank Christ for the Bomb shifts between light and dark, introspection and outspokenness, loud and, well, louder. Even the acoustic guitars can make your ears bleed when they feel like it and, although the anti-war sentiments of "Thank Christ for the Bomb" seem an over-wordy echo of Purple's similarly themed "Child in Time," it is no less effective for it. Elements of Thank Christ for the Bomb do seem overdone today, not the least of which is the title track's opening recitation (a history of 20th century war, would you believe?). But it still has the ability to chill, thrill, and kill any doubts that such long-windiness might evoke, while the truths that were evident to McPhee in 1970 aren't too far from reality today.
by Dave Thompson

Recorded during June of 1969 at Marquee Studios in London with Gary Collins and Colin Caldwell engineering, the trio of Groundhogs put the blues to rest on Blues Obituary in front of a castle on the Hogart-designed cover while six black and whites from photographer Zorin Matic grace the back in morbid Creepy or Eerie Magazine comic book fashion. Composed, written, and arranged by Tony "T.S." McPhee, there are seven tracks hovering from the around four- to seven-minute mark. The traditional "Natchez Burning," arranged by McPhee, fits in nicely with his originals while the longest track, the six-minute-and-50-second "Light Is the Day," features the most innovation -- a Ginger Baker-style tribal rant by drummer Ken Pustelnik allowing McPhee to lay down some muted slide work. As the tempo on the final track elevates along with manic guitar runs by McPhee, the jamming creates a color separate from the rest of the disc while still in the same style. Vocals across the board are kept to a minimum. It is all about the sound, Cream without the flash, bandleader McPhee vocally emulating Alvin Lee (by way of Canned Heat's Alan Wilson) on the four-minute conclusion to side one that is "Mistreated."

While Americans like Grand Funk's Mark Farner turned the format up a commercial notch, Funk's "Mean Mistreater" sporting the same sentiment while reaching a wider audience, the Groundhogs on this late-'60s album keep the blues purely in the underground. The pumping beat on "Mistreated" embraces the lead guitarist's vocal, which poses that eternal blues question: "what have I done that's wrong?" Blistering guitar on the opening track, "B.D.D.," sets the pace for this deep excursion into the musical depths further down than Canned Heat ever dared go. While "Daze of the Weak" starts off sludgy enough, it quickly moves like a train out of control, laying back only to explode again. "Times" get things back to more traditional roots on an album that breaks little new ground, and is as consistent as Savoy Brown when they got into their primo groove.
by Joe Viglione

As the Groundhogs' best example of their gritty blues-rock fire and unique form of guitar-driven music, Split reveals more about Tony McPhee's character, perseverance, and pure love for performing this style of blues than any other album. Based around the misunderstanding and mystery of schizophrenia, Split takes a raw, bottom-heavy recipe of spirited, spunky guitar riffs (some of the best that McPhee has ever played) and attaches them to some well-maintained and intelligently written songs. The first four tracks are simply titled "Part One" to "Part Four" and instantly enter Split's eccentric, almost bizarre conceptual realm, but it's with "Cherry Red" that the album's full blues flavor begins to seep through, continuing into enigmatic but equally entertaining tracks like "A Year in the Life" and the mighty finale, entitled "Groundhog." Aside from McPhee's singing, there's a noticeable amount of candor in Peter Cruickshank's baggy, unbound percussion, which comes across as aimless and beautifully messy in order to complement the blues-grunge feel of the album. Murky, fuzzy, and wisely esoteric, Split harbors quite a bit of energy across its eight tracks, taking into consideration that so much atmosphere and spaciousness is conjured up by only three main instruments. This album, along with 1972's Who Will Save the World?, are regarded as two of the strongest efforts from the Groundhogs, but Split instills a little bit more of McPhee's vocal passion and dishes out slightly stronger portions of his guitar playing to emphasize the album's theme.
by Mike DeGagne

The final installment in the Groundhogs' trio of early '70s masterpieces--also including 1970's THANK CHRIST FOR THE BOMB and 1971's SPLIT--WHO WILL SAVE THE WORLD features eight epic tracks, so stripped-to-the-bone and brutal they are barely definable as blues. With the classic line-up of the band recording for the last time (drummer Ken Pestelnik departed after this album's release), the album has some of the heaviest cuts in their oeuvre: "Earth is Not Room Enough" finds a riffy groove dissolving into mellotron-driven confusion; "Death of the Sun" foregrounds frantically layered piano and guitar arpeggios; and the album's closer, "The Grey Maze," highlights the devastating guitar work that made Tony McPhee a British legend. Hearing the latter's fret heroics, one would be hard pressed to disagree with the album's premise (bolstered by the artwork of D.C. Comics illustrator Neal Adams) that the Mighty Groundhogs were indeed here to save the world.
by Patrick Sullivan 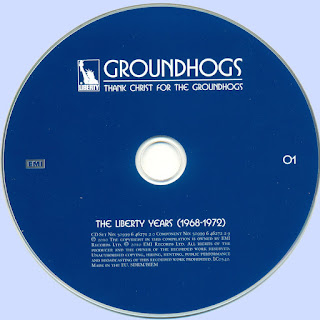 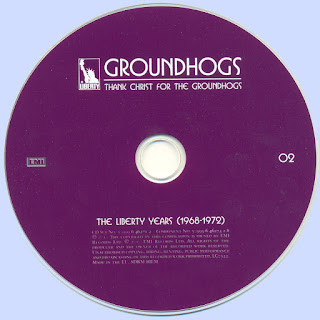 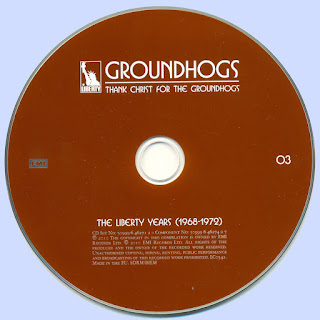 Free Text
Text Host
Posted by Marios at 7:16 AM 5 comments: