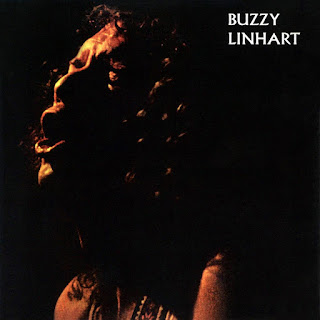 There are two Buzzy Linhart albums entitled Buzzy, one released in 1969 on Philips, and this third solo release on Buddah records in 1972. There's a jazzy "Eye 1-2-C-U Shuffle," which could be the Electric Flag with Linhart on vocals. The band -- featuring Danny Trifan on bass, guest star Moogy Klingman on organ, future Steely Dan/Doobie Brothers session man supreme Jeff "Skunk" Baxter on acoustic and electric guitars, Ten Wheel Drive's Luther Rix, and mixing by Todd Rundgren -- creates what may be the most intimate of Linhart albums released on a major label.
There's a great cover of Elton John and Bernie Taupin's "Take Me to the Pilot" with the equally great line "he's a virgin" with Buzzy quipping "aren't we all?." Interesting that Uni Records pushed much Elton John product out in this early-'70s period when Buddah had three Linhart discs in release (one on a subsidiary called Eleuthera Records, a band project called Music, with a majority of the songs written by Buzzy). On February 28, 2002, AMG spoke with the singer/songwriter's son, Xeno Linhart (note that the publishing company on some of the songs is Xeno Music, with Ascap as the Performing Rights Organization). Xeno claimed that "Apparently, shortly after recording The Time to Live Is Now, there was a drummer swap. Luther Rix and Kevin Ellman swapped bands so Luther and Bette Midler could be together, and bringing in an Indian drummer into the Trio to do the ragas seemed right. But Kevin left soon after to go with Moogy Klingman and become Utopia. All this in just a few months, and then there are the next sets of players. But the order of recording is not really the same as the order of release.
There really are two albums called Buzzy. The 18-minute version of "Sing Joy" [is] on Buzzy Phillips 1969, later on Best of Buzzy Linhart (1972) and the more memorable 8:30 version [appears] on Buzzy Kama Sutra/Buddah 1972 The Black Album, as it is called for its mostly black cover (by photographer Ira Wexler). The first Buzzy is quite unique in its arrangements. Best of Buzzy (1972) on KamaSutra/Buddah is a repackaging of the Buzzy (Phillips) and other material. So, the two "Sing Joy" (tracks) show up in a few places. It is worth some study itself, as it was the first raga Buzzy wrote (1964), and then re-wrote a few times. It is also a major component of the 30-minute long live raga jam by Seventh Sons, "4 A.M. at Franks" (also released as "Raga," both on ESP Disks). We have restored and remastered the cut for inclusion on a collection of improvised one-take recordings to be called 'Avant Buzz.'
So, there is a lot of Buzzy's material with the date 1972, but it was just a timing issue, and probably a mistake by record companies to flood the market with so much of his material all at once and not making it clear that some was recorded years earlier." On Barry Gordy's "You Got What It Takes" -- a hit for both Marv Johnson and the Dave Clark Five in the '60s, Linhart gives it a musician's treatment. Nothing on this album seems to be crafted with the charts in mind, though on "Rollin' On" Buzzy lifts melody and lines from Bacharach/David by fusing "What the World Needs Now" into his song. L. Luther Rix's "Boogaloother" is a delight with passages straight from the Ten Wheel Drive songbook. "Sing Joy" changes the mood, evolving from the percussive sounds into a rocking "Tutti Frutti" tracked live at Studio A of New York's Record Plant. The Black Album may be the least commercial of Buzzy's efforts, but it is solid musicianship and contains sounds that drew from, as well as inspired, past and future works of Ten Wheel Drive, Bette Midler, Utopia, Jimi Hendrix, and Steely Dan, and it is all quite staggering.
by Joe Viglione 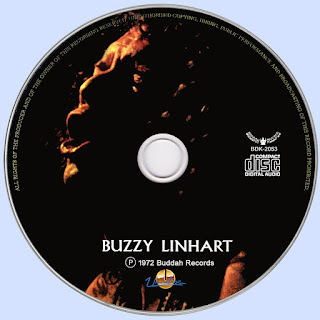