Elephant's Memory - Take It To The Streets (1970 us, a powerful rock package with blending horns, piano, guitars and protest lyrics) 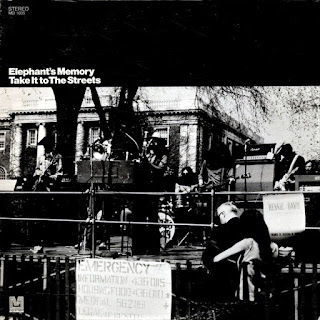 More cohesive than their RCA release in the mid-'70s, the New York underground band who worked with John Lennon, Yoko Ono, and David Peel finds themselves on Metromedia, the label which had hits with Bobby Sherman, unleashing eight originals written mostly by drummer Rich Frank and lead vocalist/tenor saxman Stan Bronstein. Guitarist David Cohen contributes to a couple of tunes, with pianist Myron Yules and guitarist Greg Peratori also involved in the songwriting, but it is Frank (listed on the credits as Reek Havoc) and Bronstein who are the major forces behind this well-known-but-not-often-heard group.
Clearly it was Lennon's participation on an early disc and not the band's notoriety which made them almost a household name, but one hit record could have changed all that. There is no hit here, but there is some experimental rock that Frank Zappa should have snapped up for his Straight Records. A bubblegum label could only move this if they were called Crazy Elephant and had something akin to "Gimme Gimme Good Lovin'." Rather you have the antithesis, "Mongoose," followed by "Power" and the revolutionary "Piece Now."
The technical proficiency is traded in for angst and lots of rock & roll attitude. "Piece Now" could very well be MC5, and the music on all three of the first tunes is dense and noteworthy. "Tricky Noses" ends side one with a flurry of bullets stopping a country-ish protest song, making the point quickly and with uneasy ease. Away from their famous friends, the seven-piece group is at least interesting here, with "She's Just Naturally Bad" sounding like Blue Cheer when they abandoned the sonic onslaught for laid-back folk-rock.
Flashes of Dylan and Lou Reed make their way onto the tune. Pianist Myron Yules delivers the only song that Rich Frank and Bronstein aren't associated with, "I Couldn't Dream," a light Paul McCartney-style throwaway number."Damn" gets things somewhat heavy, a nice counterpoint to side one's "Power." This is where the band shines, solid ensemble rock with riffs and lots of not-so-quiet energy. For collectors who need anything by anyone ever associated with the Beatles, the Elephant's Memory's collection is not to be forgotten. "Ivan" is smooth New York rock a few years before Lou Reed would enter his Coney Island Baby phase, but definitely sounding like it could fit on that epic. Take It to the Streets is a true rock & roll artifact and holds some surprises worth rediscovering.
by Joe Viglione 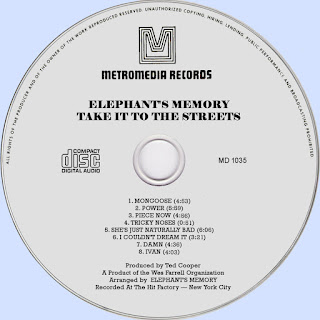 Free Text
Just Paste
Posted by Marios at 8:30 AM No comments: