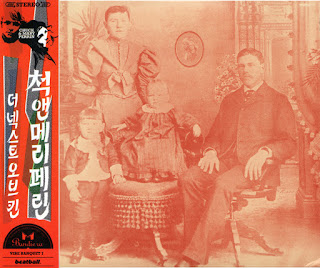 Recorded live the weekend of December 5 & 6, 1969 at Jerry Milam‘s  Golden Voice Sound Studio in South Pekin, Illinois.  Mary & I  played guitar & sang, but this time we incorporated a rhythm  section. A few months earlier, I facilitated & produced a recording @  Golden Voice for a Notre Dame band called First Friday. This was an amazingly talented ensemble that featured fleet & talented rock guitarist Norm Zeller, & bassist Andy Wallace (who is now one of the most successful mixing engineers in the music  business, having mixed Nirvana’s “Nevermind”, as well as projects for  Sheryl Crow, Rage Against the Machine, Jeff Buckley, Smashing Pumpkins,  etc).  At any rate, Norm & Andy joined us on most of the tracks, as  did Peoria Shag drummer Dave Porter.

Bruce Brown handled the cover photographic effects, which  included making a Chuck & Mary framed photo appear to be hanging on  the wall of an old tintype photo I had found at a garage sale. Remember  this was in the days before computers & such things as Photoshop.

This was our second album, & we were determined to get out &  share our musical vision.  We would drive up to Chicago almost every  weekend to perform, mostly at an intimate little spot called the  Barbarossa in the Rush Street/Gold Coast area.

And summers we’d take off in my old ’53 International Harverster  travelall (with orange plexiglas windows!) to sing at places like the  Raven Gallery in Detroit, The Bitter End, Cafe Au Go Go, & the  Gaslight in New York’s Village, The Unicorn & the Turk’s Head in  Boston. While in NYC, we signed on with the College Coffee house  circuit, which sent us on a tour,  spending a week @ each college or  university where we would perform 3-4 nights in the local coffee house  or student center.  We toured Ohio, North Carolina, Kentucky, &  Tennessee, always gravitating back to Chicago where we were developing a  strong support base.
by Chuck Perrin 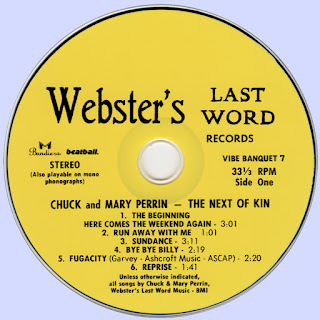 Free Text
the Free Text
Posted by Marios at 7:11 AM 3 comments: