Clive John - You Always Know Where You Stand With A Buzzard (1975 uk, extraordinary prog rock, from Man fame, 2004 remaster) 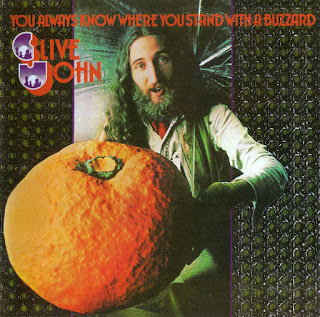 Clive John, or Clint Space or just Clint to Man-band fans, was the beloved keyboardist and sometimes guitarist for Man through most of their classic periods. His contribution to the sound and humour of the band was a big one, though you might not really realise it until you place him apart to record his one and only solo album, ie. this one. Of all the Man off-shoots and solo projects that I’ve heard (which I have to admit isn’t all of them), this is far and away the best and most consistently high in quality (and other substances), but for some reason it’s also one of the most obscure. I only discovered its existence when I stumbled across it in a random rack-shuffling in a large discount music store, and although I was instantly intrigued by a) the Man connection, b) the title and c) the cover, I was also wary of the late date 1975, by which time Man were no longer so hot on record) and the fact that I’d never heard of it before.

At this time, Clint was holed up in a remote farm in Breton, and after being asked by Andrew Lauder of UA to do a solo album, he transferred holes to Rockfield Studios in Wales to record it. Clint handled most of the instruments on this album – guitars, keyboards and vocals – but he’s backed by Man’s Martin Ace on bass, and Help Yourself’s Dave Charles on drums and engineering, as well as sundry guests on various tracks including Phil Ryan (Eyes of Blue, Quicksand, Piblokto, Man, Neutrons) and Andy Fairweather Low (Amen Corner). The cover features the still-hairy prototypical hippy freak Clint generously holding out a giant fake-looking orange. The title of the album came from what Clint said to a visitor who fled after being attacked by buzzards whose nest site he’d unwittingly approached, the point being that you’re supposed to stand your ground and the buzzards will hold back. Don’t ask me to test that one out...

‘Out Of My Tree’  begins in a kinda mainstreamy guitar rock mode, and it’s perhaps the most ordinary and seriously-toned track on the album, but don’t let that put you off, there’s better to come, and this song does have a cool slashing fuzzed guitar bit that’s nice. This track might grow a little on you over time, as it has for me. You gotta love a song that’s about questioning your sanity (at least that’s what I think it’s about...).

‘Brand ‘X’’  changes the mood considerably, not to Brand X-like fusion but with a kooky cascade of cheesy keyboard, bass and guitar matching notes and dripping down the chromatic scale before swinging into a totally chugging Man-esque hard guitar riff, with ultra-cool vocals pleading for a little bit of rock’n’roll. This is a fist-in-the-air anthem to rock and a go-get-‘em attitude that’s up there with the Fairies’ ‘Do It’ as a positive motivator. Midway it breaks down into a gutsy down-home groove as Andy Fairweather Low (here rechristened as Ferretweather) cuts loose with a wicked guitar solo. As fas as the guitar-oriented side of things go, this is like Man at their best, I guess not counting things like the 20-minute ‘Spunk Rock’ jam on ‘Greasy Truckers Party’.

‘Summer Song’  sees us in softer, spacier, wistful Man mode, keyboards predominating with a gentle, simple structure that bobs along like the Good Ship Lollipop (no, it doesn’t sound like the Shirley Temple song, I’m trying to create imagery here...), and wouldn’t have been out of place as one of the more unassuming tracks on ‘Back Into The Future’. ‘Swansea Town’ is, yes, another one to compare to Man, something that’s hard to avoid here. It alternates between, initially, a cheerier kind of Man guitar riff, that swings into a slightly strange one with a harder edge that might be called kinda ‘doomy’ (slightly) if it didn’t sound like a bunch of silly trippers having a bit of fun. Mid-time sees a typical one-note bass groove propelling a tasty dual guitar jam, and well, need I say it, if you’re a Man fan you know what you’re getting here.

‘Visitin’ The Duke’ is more traditional and down-homey at the start, with blues harmonica and guitar wheezing away, before kicking into a hard, gritty Southern boogie rock slide riff with meaty vocals, done of course a la Man, breaking down and dirty with the harmonica for another jam-out that these guys just can’t seem to escape let alone do badly, and let us be thankful for that! This track, by the way, is about visiting Deke Leonard in London.‘Love To You’ starts with bass throbs and weird keyboard sounds hovering in the background, hinting at something that doesn’t come, before a steady, loping groove sets in with a kinda psych-soul-boogie feel, if that makes any sense. Reminds me a bit of The Indelible Murtceps, in other words Australia’s legendary Spectrum in non-psychedelic/prog mode. Of course that won’t mean a thing if you haven’t heard ‘em, but I’m clutching at straws here (one of the hardest things about doing reviews, for me, is that the most meaningful and/or well-known comparisons or descriptions don’t always come to mind when you need them! And, well, I haven’t heard everything...). Anyway, if that sounds dodgy to you, you might find it’s better than it sounds on paper with my measly attempt at description, but still, not one of the better tracks on the album.

‘Overflow’  begins with some jazzy sparring for a few seconds before a structure sets in with ease and we have a mellowish, unusual rock number with a guitar rhythm and bass line that’s only a few degrees removed from reggae, though as imagined by Patto, if you can paint that in your mind. And the Patto comparison holds into the unexpected brief jam that opens up next, now denser and with more of a jazz-informed hard rock edge, though the second (and longer) jam that follows and fades out the track is more akin to a mellow, almost spacey Man circa ‘Back Into The Future’. ‘Bust Again’ is, of course, about being busted (for growing dope), and flows as a slow-plodding skanky fuzz rock number as Clint recounts the lament of the events of his undoing at the petty hands of the law. As Clint puts it, “What the fuck can you do with a bush or two of my weed?” Musically, this is comparable to Man’s ‘Romain’ and is likewise pretty cool.

‘Ferret Interview’ is a ridiculous interview in silly voices regarding the sexual habits of ferrets, apparently “rather a domesticated form of perverted stoat”! I won’t give away any of the rest, suffice to say you’d have to be made of stone if this track doesn’t raise a few chuckles.‘Hold Your Ferret Aloft’ is in a slightly odd angular jazz rock vein, cruisy and juicy and reeking of the weed, with oozing harmony vocals imploring us “hold your ferret aloft” and “vote for stoat”, amongst other things I can’t quite make out. However, instrumental interplay predominates, as the band jam away in a lazy, stoned and virtuosic way through various shades and permutations of the basic groove, Phil Ryan providing some tasty, unshowy keyboard licks. I can certainly imagine this track sitting comfortably on the Chillum album, or maybe snuck into some early/mid-70’s Zappa album, and it’s one of the few tracks here that doesn’t sound derived from styles set down previously by Man – let’s call them Mannerisms, eh? But how can you accuse Clint of being derivative of something he helped create and was a part of in the first place? Even if you could get away with calling any of it derivative, there’s no escaping that the music is still great regardless, and that’s what matters ultimately. Unless you don’t like this sort of thing, in which case, why have you read this far?

This album was reissued on CD by Eclectic in 2004, with an added coda at the end of ‘Hold Your Ferret Aloft’, which basically consists of 10 seconds or so of keyboard doodling after the track has otherwise ended.
by achuma, 24/05/2006 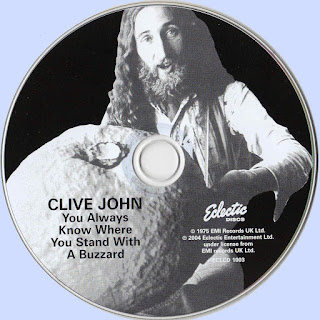