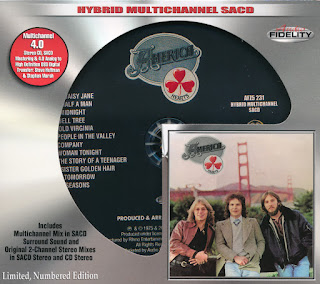 I began listening to this album with no great expectations, but by the third song the excellence of the arrangements and production was so evident -- and so comforting -- that the rest of the disc moved easily and pleasantly. America still dispenses tuneful, if basically bland, pop-oriented pastiches of Crosby, Stills, Nash and Young, but let's face it: as pabulum goes, it's remarkably well prepared.

The man responsible for the arrangements and production of Hearts is George Martin, and it's high time he got some kind of award. Before he became associated with the Beatles (and it is fair to say that Martin's skills, which are diplomatic as well as musical, helped the Beatles immensely). Martin produced the recordings of the Goons, featuring Peter Sellers, who were the Monty Python of the Fifties. Whether dealing with lunatic comedy, the farthest reaches of rock, or the very tuneful and straight-ahead pleasantries of America, Martin has always brought to his productions taste combined with an understanding of both what performers want to do and what they are capable of doing. He is a very accomplished gentleman, is Mr. Martin, and without him the history of recent pop music would have fewer great moment.s
by Joel Vance, Stereo Review, August 1975.

America released many hit albums including their fifth studio release which is a favorite among fans. This superbly crafted 1975 classic was produced by legendary Beatles producer George Martin and is a musical treasure filled with great harmonies and hooks! 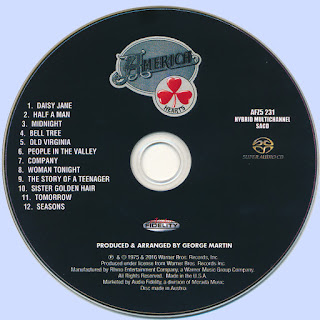 Free Text
Text Host
Posted by Marios at 5:41 AM No comments: