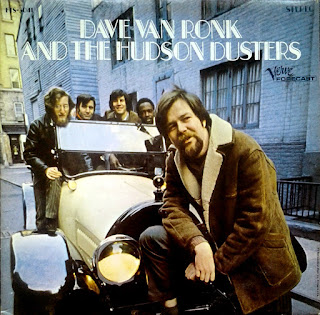 Guitarist, singer, songwriter, and native New Yorker Dave Van Ronk inspired, aided, and promoted the careers of numerous singer/songwriters who came up in the blues tradition. Most notable of the many musicians he helped over the years was Bob Dylan, whom Van Ronk got to know shortly after Dylan moved to New York in 1961 to pursue a life as a folk/blues singer. Van Ronk's recorded output was healthy, but he was never as prolific a songwriter as some of his friends from that era, like Dylan or Tom Paxton. Instead, Van Ronk's genius was derived from his flawless execution and rearranging of classic acoustic blues tunes.

Born June 30, 1936, in Brooklyn and raised there, Van Ronk never completed high school, and left home for Greenwich Village, a few miles away, in his late teens. He took his inspiration from blues and folk singer Odetta, who encouraged the then merchant seaman to play the classic jazz music that he was so keenly interested in. Often regarded as the grand uncle of the Greenwich Village coffeehouse scene, the self-effacing Van Ronk, an engaging intellectual and voracious reader, would have been the first to tell you that there were others, like Odetta, who were around the Village before him. As the blues and folk boom bloomed into the '60s, Van Ronk became part of an inner circle of musicians who lived in the Village, including then up-and-coming performers like Dylan, Paxton, Phil Ochs, Ramblin' Jack Elliot, and Joni Mitchell. An expert fingerpicker, Van Ronk was influenced as a vocalist by Bing Crosby and Louis Armstrong.

Van Ronk's recording career began in 1959 with Sings Ballads, Blues & a Spiritual on Moses Asch's Folkways label. His reputation wasn't solid, however, until he began recording for the Prestige label in the first half of the '60s. These recordings allowed him to tour throughout the U.S. and perform at major folk festivals like Newport. Although he had a short-lived folk rock band called the Hudson Dusters in the mid-'60s, the bulk of Van Ronk's recordings were solo acoustic affairs. Van Ronk's various recordings serve different purposes; to check out Van Ronk the songwriter, pick up Going Back to Brooklyn (Gazell Productions, 1985), which was his first all-original album, containing only his own songs; for students of Van Ronk's complex guitar technique, pick up Dave Van Ronk, a compact disc reissue of two earlier Prestige albums, Dave Van Ronk, Folksinger and Inside Dave Van Ronk. Another compilation, The Folkways Years (1959-1961), is available from Smithsonian Folkways. His 1967 album for Verve Forecast, Dave Van Ronk and the Hudson Dusters, is worthy of reissue on compact disc for its sound quality and for the statements it makes about American society in the '60s.

Van Ronk continued to record throughout the '90s and beyond, with the Alcazar Records label releasing From...Another Time and Place in 1995 and Justin Time issuing Sweet and Lowdown in 2001. He died unexpectedly while undergoing post-operative treatment for colon cancer on February 10, 2002.
by Richard Skelly

The sound on this album is reminiscent of the New York folk-rock band The Blues Project. It begins with a ragged rendition of The Hollywood Argyles' "Alley Oop" and ranges from that doo wop chestnut to Joni Mitchell's "Chelsea Morning and Clouds" to "Romping Through the Swamp." More familiar Van Ronk territory is covered, also with reprise performances of "Dink's Song" and "Cocaine." Dave Van Ronk always brings his enthusiastic roar to his material and makes it his own. His rendition of "Swing on a Star" is but one example. The Hudson Dusters seem to be a combination electric jugband, folk orchestra and bubblegum band, as on "Mr. Middle." A strange collection.
by Richard Meyer 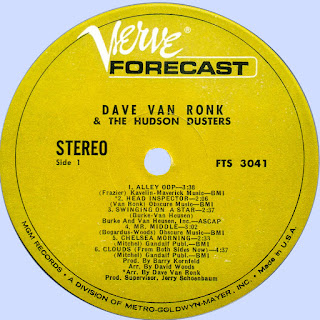 Free Text
the Free Text
Posted by Marios at 10:15 AM No comments: