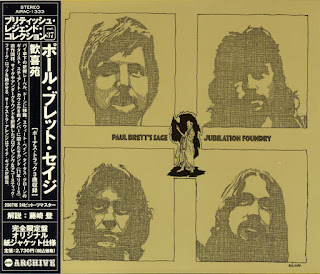 Paul Brett is widely regarded as one of the finest 12-string acoustic guitarists in the world and also has an amazing collection of guitars, something that he is probably better known for these days than his recorded output. Having been performing since the early 1960s he has contributed his skills to many records including those by Arthur Brown, Velvet Opera, Tintern Abbey, The Strawbs and Fire to name but a few. However, he also released a trio of albums with his band Sage between 1970 and 1972. Long out of print, Esoteric have done their usual expert job in re-mastering and reissuing the albums complete with bonus tracks and rare photographs. All three albums were initially released by Pye Records, either on the main label, or in the case of the latter two albums, on their Dawn imprint label.

By the time of the second album, Jubilation Foundry, the band's name had changed to the more grammatically correct Paul Brett's Sage and Nicky Higginbottom had been replaced by Stuart Cowell, a second guitarist. Although Higginbottom had gone, some flute playing persists, particularly on the opening track Cottage Made For Two. In other changes, there is more harmony singing and a greater use of orchestrations (by Mike Gibbs) plus an overall rockier feel, although both Brett and Cowell still provide plenty of acoustic in-put throughout the album, such as on their guitar playing on Pasadena Days and piano playing on Keeper Of My Heart, both written by Steve Voice, the younger brother of conga, bongo and anvil (!) player Bob Voice. The simplicity of this latter song, along with the gorgeous arrangement blending strings, wind and brass, make this a killer love song.

There was also an expansion in the styles of music covered, with both sides of the single from the album Goodbye Forever and Good Old Fashioned Funky Kind Of Music being somewhat atypical and although interesting, not the strongest tracks on the album to my mind. (As an aside, the marketing prowess of Pye Records is exemplified by the single being wrapped in a sleeve featuring a photograph which included Higginbottom!). Tuesday Evening features some great harmony singing from the whole band, as does Help Me Jesus during which Voice gets the most out of his bongos.

However, it is the title track, featuring the aforementioned anvil, that takes the credits with some fine playing by the ensemble, haunting lyrics and a great dirge-like quality. The three additional tracks are from an EP that was released between the first and second album which featured Reason For Your Asking from the debut album as lead track. Stylistically, the tracks are more akin to those on the first album, acoustic with added orchestrations on the first two tracks, with Everlasting Butterfly being the standout number, and a more upbeat chant on To Everyman [Freedom].
by Mark Huges 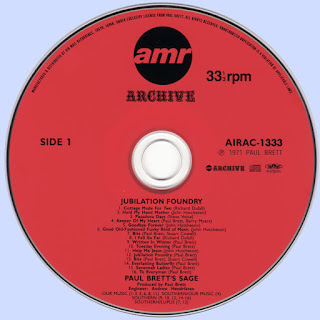 Free Text
the Free Text
Posted by Marios at 6:56 AM 2 comments: