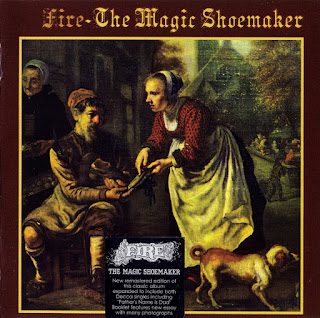 For me the most depressing thing about today’s rock music is that so much of it exhibits such a lack of creativity or originality. If something sells, clone it, quickly. What a contrast to the late sixties, when for a brief heady spell the artists rather than the bean-counters had the whip hand and the spirit of experimentation soared over everything. Of course this produced as many heroic failures as acknowledged triumphs; Fire’s The Magic Shoemaker bombed on release, and even such retrospective reviews as it has received have frequently been ambivalent. Ah, what have we got here, then? Former psychedelic outfit moves towards progressive rock with a song-cycle that’s too lightweight plot-wise to be a concept album, too naïve and inconsequential to be a rock opera . . . hmmmm. But what is true is that it certainly represents a brave attempt to be different.

London trio Dave Lambert (vcl, gtr, keys), Dick Dufall (bs, vcl) and Bob Voice (drs, vcl) had impressed the Beatles’ Apple label sufficiently to score a deal that resulted in the classic psych A-side “Father’s Name Is Dad”. The marriage was not a happy one, though, and Fire soon found themselves at odds with the music industry at large. Retiring to the suburbs, Lambert spent a year writing and demo-ing the songs for The Magic Shoemaker, based around a whimsical children’s bedtime story in which a shoemaker cobbles together a pair of shoes that unexpectedly allow the wearer to fly. These are loaned to a king whose country is threatened with war by a neighbouring state; when the king confronts his opposite number from the sky the latter’s army are spooked and a peace treaty is forthcoming. Admittedly, it’s a slender peg to hang your creative coat on, but in its own quirky homespun fashion it works.

The premise of the album is that the narrator (Lambert, in a homely Home Counties accent) tells the story to a group of kids on a coach trip (real kids’ voices, overdubbed travel noises). Short pieces of the narrative occur between and within the songs whose lyrics broadly parallel episodes in the tale, some closely, others in more abstract fashion. Musically the songs follow a basic guitar-driven pop-rock template, varying widely in style and tempo – Tommy would undoubtedly have been an influence – with frequent psychedelic studio enhancement, particularly on the opening “Tell You A Story”, “Only A Dream” and the long instrumental coda of “Reason For Everything”. Pick of the bunch for me is “I Can See The Sky” with its raw freakbeat vibe, but they’re all quite engaging. Lambert’s lead vocal, somewhere between Daltrey and Bowie, is sometimes somewhat over-affected, but the musicianship is excellent throughout with the basic guitar trio being complemented by Lambert’s modest keyboards and plenty of top-drawer lead guitar work from himself and Velvet Opera’s Paul Brett. Future Strawbs partner Dave Cousins makes a cameo appearance on banjo on the superfluous jugband ditty “Happy Man Am I”. The production by Pye’s Ray Hammond is unsophisticated but its contemporary favouring of stereo separation and reverb suits the project and the interleaving of songs and narration is seamless.

Predictably, The Magic Shoemaker tanked well and truly on its release on Pye in 1970, being too late for psych and too lightweight for prog, and subsequently became a much-sought-after rarity until its inevitable reissue on CD. The current Sanctuary edition tailgates the original album with the A’s and B’s of both of Fire’s earlier psych singles including the indispensable “Father’s Name Is Dad” and “Treacle Toffee World”. As an interesting epilogue, after a long and successful association with Cousins in the Strawbs Lambert reformed Fire for a one-off concert in 2007, performing Shoemaker in extended form including the earlier psych sides and other unreleased songs. The gig was recorded for sound and video and subsequently released on CD by Angel Air as The Magic Shoemaker Live, receiving wide acclaim . . . which is more than the original release achieved.
by Len Liechti 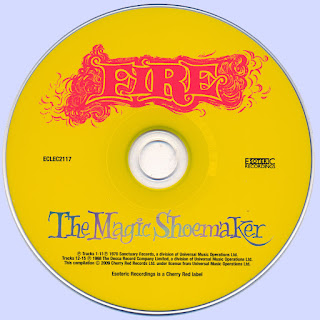