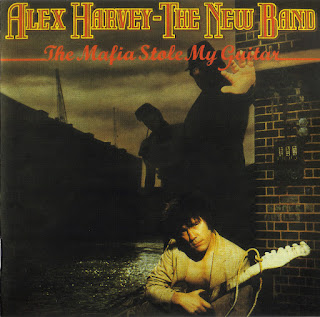 This 1979 outing saw Alex Harvey returning to the rock music world for what would be his final album. It's no big surprise that The Mafia Stole My Guitar sounds a lot like the Sensational Alex Harvey Band: the music remains the same unusual but intriguing blend of prog ambition and punk energy and it also contains a few of Harvey's trademark oddball cover versions (example: his surprisingly straight-faced cabaret version of "Just A Gigolo/I Ain't Got Nobody"). What is a surprise is how consistent The Mafia Stole My Guitar is, especially in light of the uneven final albums of his last band. While the album never coheres the way classic Alex Harvey outings like Next did, each of the songs feels inspired and benefits from a carefully-crafted sound:"Wait For Me Mama" contrasts a wailing, impassioned vocal from Harvey with a tightly-controlled, gypsy-flavored groove from the band while "Oh, Spartacus" is a Roman adventure tale that takes the story of its title character and gives it a glam rock beat.

The Mafia Stole My Guitar also adds finds Harvey shifting his sound in a new direction, with the saxophone taking an upfront role in the arrangements and adding a jazzy flair to the proceedings. A good example of this new jazziness is the cover of "Shakin' All Over," which alters this classic Johnny Kidd and the Pirates hard-rock nugget by raising the tempo to an amphetamine level and adding all sorts of jazz-fusion inspired riffing over the top.

This album also contains one of the loveliest songs in the Harvey canon in "The Whalers (Thar She Blows)," a surprisingly gentle and lyrical song layered with plenty of gentle synthesizer and saxophone shadings. The end result is a rocking yet stately-sounding slab of music that is unmistakably the work of Alex Harvey. While it's tragic that Harvey would never record again after this album (he died of health problems in 1981), the Mafia Stole My Guitar remains a fine addition to his legacy.
by Donald A. Guarisco 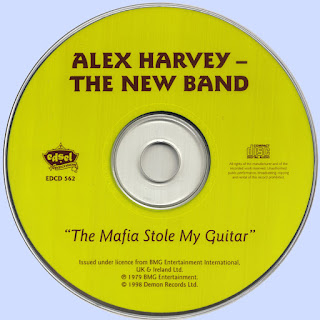