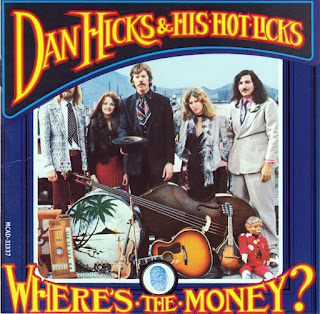 Recorded live at the Troubadour in Los Angeles, "Where's The Money?" was originally released on Blue Thumb Records. It is now available on CD from MCA Records. The innovative LP cover has a fold-over flap at the top, and the album cover opens to reveal the song lyrics.

"Where's The Money?" introduced us to the best-known Hot Licks lineup, including Lickettes Maryann Price and Naomi Ruth Eisenberg. The album also features some classic Dan stage-patter ("You probably think it's easy being up here. Singing and everything, and playing. It's not. It's not easy. Thank you.").
Dan-Hicks

Before they could release a second album of their patented good-time hippie acoustic swing, Hicks and his band parted company with Epic records. That their fresh start would be marked by the release of a live set may seem odd at first. But the album does in fact capture a certain intimacy missing from their studio debut. Songs that would remain staples of the Hot Licks repertoire for years to come are found in their most well-known versions here, including the title track, "I Feel Like Singing," "Shorty Falls in Love," and "By Hook or By Crook." The between-song banter even stands up to repeated listenings. It's not often that can be said about a live recording.
by Brian Beatty 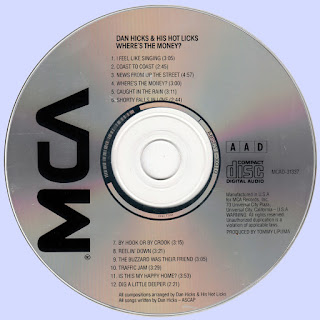 Free Text
the Free Text
Posted by Marios at 4:15 AM 2 comments: