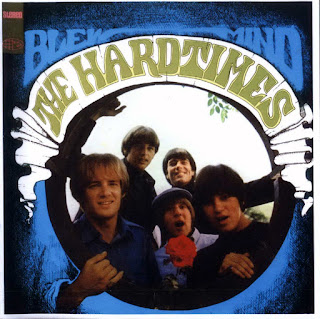 The Hard Times certainly enjoyed some hard times - almost 40 years of obscurity to be exact - but thanks once again to the fine folks at Rev-Ola, a lost 1960s group with riches of talent and musical goodness has been unearthed to be rediscovered in this modern age of rediscovery. The Hard Times were one of many groups trying for the big time in mid 60s California, but unlike groups who did make it big like The Mamas and Papas, The Doors, Arthur Lee's Love, and Buffalo Springfield, The Hard Times were a mere blip on the map.

Like many groups of the time, The Hard Times showed us their best work first on their 45 singles. The Hard Times 45s have been sought after for years now, so to have them all collected in one spot, along with their sole LP from 1967, Blew Mind, is a true revelation. Like their fellow Where the Action Is cohorts The Robbs (both groups served as house band for the Dick Clark produced teen pop program), The Hard Times put out a slew of amazing folk rock gems on 45s (and here's hoping The Robbs will get the same treatment The Hard Times have been afforded on this Rev-Ola reissue).

Centering attention on The Hard Time singles compiled here for the very first time (and included as bonus tracks) is indeed a real treat. Not only does it become apparent that The Hard Times were an excellent folk rock outfit equal to groups like The Robbs, it becomes apparent just who the unsung heroes of this group are: Hard Times' songwriters Rudy Romero and Bill Richardson. Rudy and Bill wrote a number of The Hard Times' songs included here, and a few of the singles were re-recorded for the Blew Mind LP, while others were not.

You're Bound To Cry is a folk rock gem which includes an excellent melody played on the mournful sounding harmonica and wouldn't sound out of place on The Rolling Stones' Between the Buttons. That's All I'll Do continues with a more rollicking sound, but retains that haunting harmonica. Goodbye has wonderful harmonies and folk rock guitar work in a Beatlesque way, and certainly sounds more together on the 45 version as compared to the stereo LP version, but either version shows the band in a strong light. There'll Be a Time has a great introduction combining strummed guitar riff and the harmonica, but doesn't hold up as well during the verse.

They Said No works the rocking sound a bit better, with angsty vocals that are only slightly tempered by the harmony background vocals and slapping rhythm that would have surely got the kids dancing back in 1966. A really amazing find is the Al Kooper composition Sad Sad Sunshine which sounds like Goffin/King's Wasn't Born to Follow (the song The Byrds sang in Easy Rider - which incidentally The Robbs covered as well), any fan of that song could do much worse than to check out this song. Wow, what a great song - the 45 version and the LP version have different feels to them too which make for interesting comparisons. Fortune Teller was the closest The Hard Times came to a hit, and while it pales in comparison to other versions of this song, it certainly will be a favorite of anyone who checks out this cd. Give to Me Your Love is a Rudy composed tune performed by The New Phoenix and produced by Mama Cass Elliot which has some peeling guitar licks and a haunting melody which opens up nicely thanks to the sweet vocals (Thanks - its b-side is an instrumental version of the a-side).

A few of the songs from the Blew Mind LP stand out too. The aforementioned Fortune Teller is probably stronger in its LP version, and a real standout tune. Play It for Me is probably my favorite Hard Times LP track, with it's giddy instrumentation and harmony vocals; it makes me smile every time I hear it. Take a Look Around is a really sweet ode to the things we take to granted in this world, and is a truly inspiring moment. Not Me combines a Beatlesque guitar riff with Donovan styled vocals, and is a groovy angsty LP track. I'm Not a Rock is another Donovan styled rocker, which isn't half bad. Under the Sunlight is an interesting attempt at a more psychedelized folk rock tune, which doesn't wholly work, but does end up with some interesting pop guitar work. The really tremendous psych moment that does work wonders is the odd title tune, Blew Mind combines droney guitar and gong hits with radio broadcasts sampled in and a psych melody with a mantra like vocal singing about "Blew...Blew....Blew Mind."

The downside to the Blew Mind LP is a handful of so-so covers which were no doubt the idea of the record company (indeed much of the album was reportedly recorded by session musicians). Songs like Candy Man (which does get a pretty unique arrangement), Colours (the Donovan tune), and The Beatles' Here, There and Everywhere all have an easy pop feel to them, but don't seem to match the goodness of the best by The Hard Times. Small complaint, for an otherwise amazing compilation from the fine folks at Rev-ola.
by Patrick (The Gullbuy), November 4, 2003 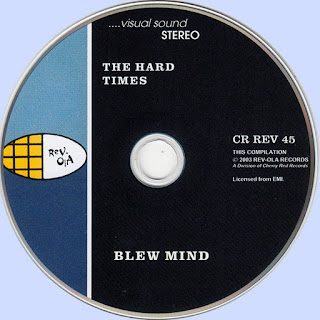