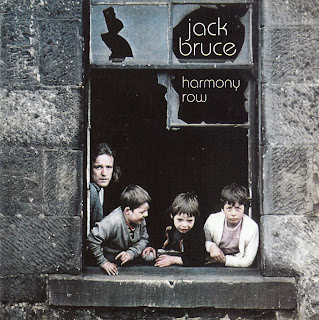 Harmony Row is the legitimate follow-up to Jack Bruce'excellent songs for a tailor, although 1971 also saw the almost-simultaneous release of 1968 jazz tapes entitled Things We Like by this artist. An elaborate gatefold package has a shadow photo of the artist from the back, overlooking a golden sun on the waters. The self-produced disc begins with the pop excursion "Can You Follow," which blends into "Escape To The Royal Wood (On Ice)."

Jack Bruce provides the voice, keyboards, bass, and some percussion, making this very much a solo project. "You Burned The Tables On Me" takes things into a progressive rock-meets-jazz arena. The only reference to blues here is Bruce's voice, but guitarist Chris Spedding's scratchy guitar, and the percussion -- either by Jack Bruce or drummer Jim Marshall (who plays on what is not specified) make the track sound almost like Cream without Clapton.

There's a rare photo of Peter Brown in the second cardboard gatefold, and one of Bruce, while all of Brown's lyrics are spread out for public consumption. A nice touch, as Peter Brown is to Jack Bruce what Keith Reid is to Procul Harum, and the cleverly obscured words are sometimes the only foundation to grasp at while one of rock & roll's most innovative bassists goes from genre to genre, combining rhythms and melodies that defy commercial categorization.

Harmony Row is the album that combines many flavors of Bruce's experimentations, making it courageous, adventurous, and hardly the product for a mass audience. "Folk Song" is barely a folk song; it is a progressive pop tune with that elegant, Procul Harum-like, sweeping, mystical statement. There's a pretty piano against church-like organ and vocals, with amazing guitar embellishments by Chris Spedding. "Folk Song" has elements Bruce would examine again, on the album Monkjack; it's a song which should have made him the darling of underground FM radio.

It's a far cry from the all-out assault of his forthcoming power trio, West, Bruce & Laing, which emerged a year after this. The delicacy of "Smiles And Grins" suggests that hard jazz is what would have given the project with Leslie West a much needed diversion. But what happened was that Bruce embraced the trail Mountain stampeded down, while a purer blending of the two would have been re-readings of this Harmony Row material.

"Post War" is a good example of how the underappreciated Leslie West could have expanded his influence -- Spedding's contributions are enormous, and like West, he is the only other musician save the drummer on Bruce's essential projects in 1971 and 1972, on the albums Harmony Row, and Why Dontcha. Drummer Jim Marshall appeared on the previous songs for a tailor, as did Spedding, though they didn't perform together on that disc. Here, Jack Bruce takes two players from that solo album, and moves them into another head-space. His use of the talents around him is impeccable, and yet another reason why fans should have embraced this quirky and intelligent troubadour.

"A Letter Of Thanks" is so complex it borders on The Mothers Of Invention-style of non-groove, while "Victoria Sage" is more in-line with the ideas set forth on songs for a tailor, and with exquisite vocals by this tremendous singer. The final track, the tasty, Spanish-influenced "The Consul At Sunset," utilizes multiple percussive ideas with piano and guitars overlapping Peter Brown's words; those words are as important as the contributions from Marshall, Spedding, and Bruce. It's actually quite an amazing transition when set against the other discs released in this four-year period, and a stunning output from a major artist without yielding a Top 40 hit.
by Joe Viglione 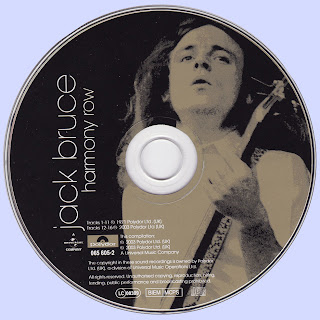