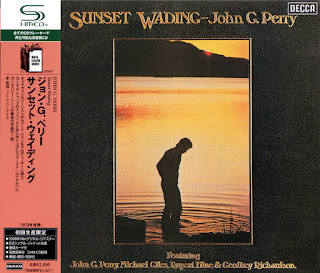 With a pedigree that includes playing with Caravan, Quantum Jump and Curved Air as well session work on albums by highly regarded artists such as Anthony Phillips and Gordan Giltrap, the name of bassist John G Perry will be familiar to many. What may not be so well known is that Perry recorded a solo album way back in 1976 that was somewhat lost in the musical climate of the time. The various bands he had played in and the musicians he had met during sessions allowed him to assemble an impressive cast of friends to perform on the album, among which were Caravan bandmate Geoffrey Richardson, producer and multi-instrumentalist Rupert Hine, arranger, conductor and future founder of The Penguin Cafe Orchestra Simon Jeffes, percussionist extraordinaire Morris Pert, original King Crimson drummer Michael Giles plus two members of Italian progressive band Nova, saxophonist Elio D'Anna and guitarist Carrado (or Corrado) Rusticci.

Competing in the market place against debut albums by The Sex Pistols, The Clash and The Damned, the rural airs and graces of the largely instrumental Sunset Wading never really stood a chance. The four vocal numbers are all very brief: I Wait My Friend features Beryle Streeter who does a remarkable impression of a theremin on this plaintive opening number. Confusingly, the words to How Goes The Night? feature in the song Devoke Water and the spoken poem On The Moor is recited in Morning Song! Thankfully the words to Sunset Wading are sung during the song of the same name and form a quite mellow end to the album with a track that is charmingly beautiful and serene.

The rest of the album is a mixture of various textures, from the piano and flute of Birds And Small Furry Beasts, the musical storm of, er Storm, the rocky Ah Well, You Can Only Get Wet! and the jazz fusion of Etude, there are certainly enough styles to keep one's interest alight. Throughout, the playing is exceptional, with hats off in particular to Simon Jeffes whose arrangements for the string quartet are entirely sympathetic to the music performed by the rest of the band. Perry himself contributes some fine bass playing in a variety of styles creating rhythms that are often funky and always great. The second side of the album, starting with Dawn, is a musical concept undoubtedly inspired by the Rupert Hine poem The Land Of The Lakes. Based around a day in the Lake District, and featuring unedited sound backdrops recorded on location and revealing "the first cock-crow at Down-in-the-Dale to the last breakfast hungry farm hound". Much of the music has a feel of being improvised or jammed, but with musicians of such calibre that is not a criticism, but a bonus, particularly as there maintains a cohesion between tracks, despite the different styles. That has a lot to do with the work of Richardson who, I feel, has always been immensely undervalued as a musician.

Sunset Wading is an album that fits in neatly with the music of Perry's most famous previous band mates, that of Caravan. Although not some great long lost classic album, it does provide 40 minutes of largely unchallenging, familiarly rural and interesting music. Had it been released a few years earlier then it would have undoubtedly made a bigger impact, but as is the case for a large number of albums that were out of their time, it has largely laid unnoticed for many years. Now's the time for rectification!
by Mark Hughes 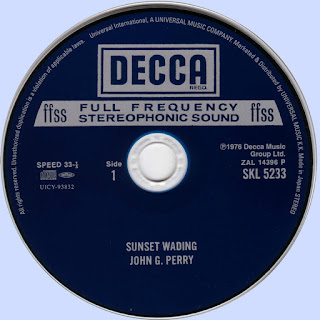