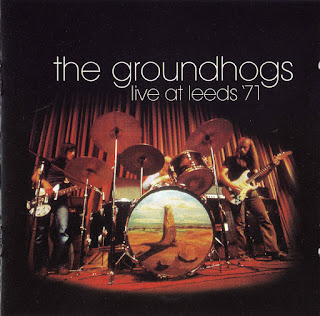 Although there are several Groundhogs live albums that have popped up in the last decade or so, most of them were recorded well after the band’s early 70’s peak. “Live at Leeds ‘71”, recorded when the band was on tour opening for the Rolling Stones, is a fantastic exception. Rumour has it that this show was recorded at the personal behest of Mick Jagger himself, a fan of the band who gave the master to Groundhogs main man Tony McPhee and had a few copies pressed for promotional purposes. Whether or not this is true doesn’t really matter, as there’s so much smoke and mirrors in rock and roll mythos that it becomes virtually impossible to separate the bullshit from the truth. In any case, it makes for a nice story, and what’s really important is the result: a short but potent snapshot of the classic Groundhogs line-up of Tony McPhee (guitar/vocals), Pete Kruickshank (bass) and Ken Pustelnik (drums) rocking like a motherfucker in front of a bunch of Stones fans.

The album finds the band playing 3 songs from their then newest LP, “Split”, and 2 more their previous one, “Thank Christ for the Bomb”. Opening with “Cherry Red”, arguably the bands finest bit of studio glory, the band starts out strong and only gets better as the show progresses, the cacophonous but limber bass and drums providing ample prodding for McPhee’s sheets of stinging guitar fuzz. “Cherry Red” is perhaps the only song here that doesn’t quite equal the studio version, but that’s only because the studio version is so fucking great to begin with. McPhee’s marble-mouthed vocals can’t quite replicate the multi-tracked female impersonator chorus from the original, but the guitar is even more rough & ready, the sound of the whole album falling somewhere between the MC5’s “Kick out the Jams” and Grand Funk Railroad’s “Live Album”. The band tackle’s “Garden” next, showing great restraint on the verses while nearly doubling the tempo on the chorus riffs.

Much like the underrated Blue Cheer, The Groundhogs knew the value of dynamics, even if the volume is on 11 most of the time here. “Split, Part 1” is given a great workout here, sounding considerably more muscular than the studio version, and Tony takes some time to stretch out a bit during the second solo. The delta/dada blues of “Groundhog” is next, with Tony going solo on guitar and vocals. While not as “authentic” sounding as the studio version, it’s yet another fantastic showcase of McPhee’s oh-so-very underrated guitar and vocal skills. I will admit the decision to leave out the constant bass drum “thump” of the studio version here is a little baffling, but if you listen closely, you can hear a few people in the audience offering some helpful handclaps.

The band caps things off (at least on this recording) with the extended jam-a-thon of “Eccentric Man”, McPhee’s low-key introduction standing sharply at odds with the staggeringly powerful intro of the song. One of the group’s heaviest studio cuts is transformed into an absolute monster here, the tempo and volume both increased considerably. Cruickshank’s meandering throb and Pustelnik’s drunken octopus bashing push along McPhee’s shrieking guitar improvisations like a meth-raging Cream. This was some of the heaviest stuff anyone was putting out at this time, with Blue Cheer having turned down and close to breakup and Grand Funk on their way to “We’re An American Band” mediocrity. “Live at Leeds ‘71” is a great example of how great the trio of McPhee, Cruickshank and Pustelnik really were, and it shows them at their peak as a band: energetic, loud-as-fuck and full of fire and purpose.
by Brandon Tenold 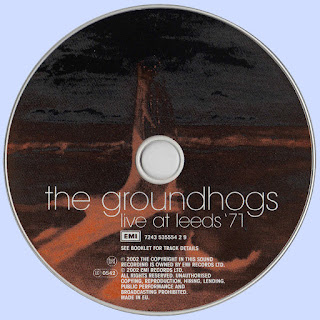 Free Text
Text Host
Posted by Marios at 8:12 AM 2 comments: